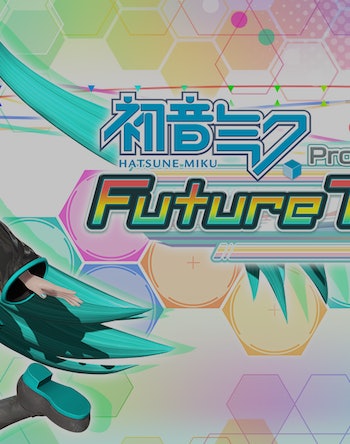 Hatsune Miku: Project Diva Future Tone dazzles like so many neon lights on a Saturday night in Shinjuku. It brings the hit arcade game’s rainbow hues to the PlayStation 4 faithfully, and with over 200 songs to play through, it’s a dream for both fans of rhythm games and Hatsune Miku devotees.

The star of the show, Hatsune Miku, is a culmination of both Crypton Future Media’s vocaloid software and hologram technology. Hatsune Miku hits the stage, travelling around Japan, and more recently, the world, in a futuristic light show that is equal parts eerie and fascinating. Fans crowd stadiums, waving glow sticks in time to the beat as Miku strolls the stage in full 3D, a towering 8-foot tall projection.

Hatsune Miku’s swift rise to success naturally spawned a host of wildly successful rhythm games on consoles before they later began to appear in Japanese arcades. Future Tone is the latest iteration, a port of the 2013 version of the arcade game. As such there’s no real story to be found; this game is all about the music. It also comes in three parts. The base game, Prelude, is free and offers two free songs as a demo. If you really want to access all that Future Tone has to offer, you can purchase the game’s two song packages, Future Sound and Colorful Tone, each of which will run you $29.99, or $53.99 if you opt for the bundle.

The game itself is pretty loose in structure; all the music is unlocked at the start of the game. You’re free to shuffle through the massive music library, tagging your favorites for use in your own custom playlists, or just going through alphabetically song by song. The UI is a bit cluttered, but the organization options make it all very easy to sort and find what you’re looking for. You can also change the difficulty simply by pushing the right or left directional buttons. Within the tracks themselves, you can toggle “No Fail Mode,” change up the speed, or choose between “Practice” and “Music Video” mode depending on the experience you’re looking for.

Playing through a song, you use the shoulder buttons or analogue sticks, left and right arrows, and the O and X buttons to tap your way to the end. It’s a lot tougher than it sounds, as the onscreen directions appear in surprising shapes and combinations, meaning you’ll have to think fast. The directional arrows and face buttons can be used interchangeably, which takes the load off of frantically finding your place or contorting your hands into impossible shapes. It takes a bit of practice, but ultimately it’s relatively responsive and precise, and each successful input is rewarded with a tactile hi-hat “ping.” After you master a song on Hard, you’ll unlock the game’s Extreme mode, and upon perfecting that, some songs even feature an Extra Extreme setting if you were somehow blessed with magic fingers.

Again, there’s no real story as this is an arcade port, but I was content sifting through the huge musical catalog on offer. The game features music from both the Hatsune Miku: Project Diva console game series and the arcade games, featuring a number of vocaloids well-loved in their native Japan as well as many of Miku’s top hits. They range from bittersweet ballads, to a Finnish polka, to thumping house beats. While Hatsune Miku’s artificial high-pitched voice may not be for everyone, you’ll find enough variety here to appeal to even the most selective musical tastes.

However, if you tire of the main game, you can head to the Customization menu and cash in your “Vocaloid Points.” As you successfully complete songs you’ll rack up these points, which you can use to buy costumes for Hatsune Miku and all of her other vocaloid friends, including a Sonic the Hedgehog suit or some Space Channel 5 digs. If you’re feeling especially creative, you can create your own custom outfits with the various hairstyles and clothing pieces you collect. There’s a lot to dig through here, and the outfits are all very detailed. If you’re a Hatsune Miku fan, there are a lot of iconic costumes to choose from if you wish to take a stroll down memory lane.

There’s plenty for fans, but the game translates well for the uninitiated, too. There’s a huge variety in the song selection, and each track is skillfully choreographed across all difficulty levels. You can easily sink an entire afternoon into the game with the sheer amount of content contained within its prismatic packaging, but it’s also perfect if you’re short on time but want to get a quick spurt of gaming in. Don’t brush off Project Diva Future Tone as just another licensed game. It’s the perfect rhythm game fix, bringing the Japanese arcade experience straight to your living room.