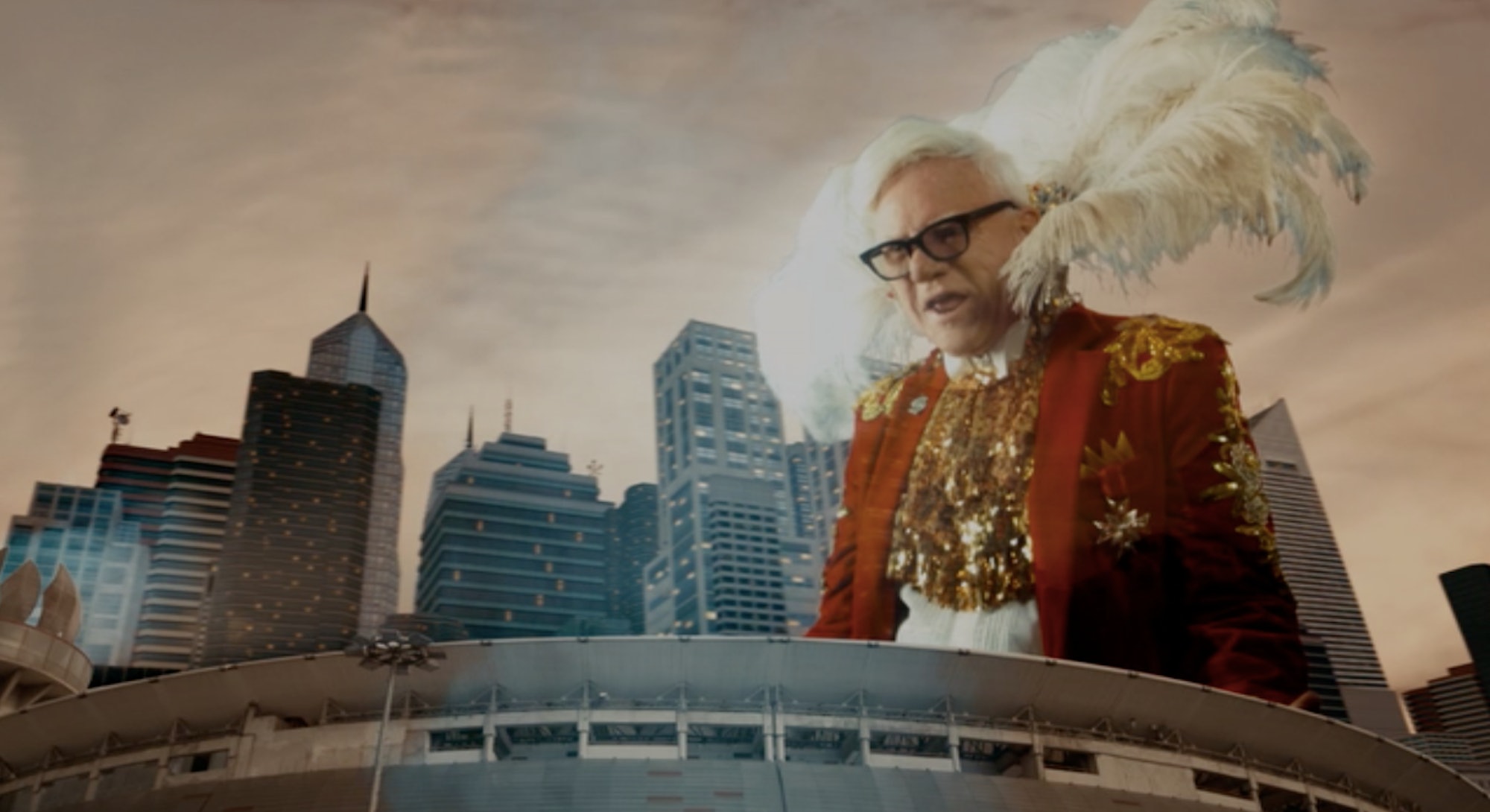 Roger Corman built his B-movie empire on films with preposterous plots that cemented absurdist social satire, and he had no intention of changing the formula early last year when he flew to Peru to make Death Race 2050. A remake of his 1975 cult classic dystopian racing film Death Race 2000, the movie focuses on a beloved deadly Hunger Games-esque car race across a ruined America. The race is overseen by a leader known simply to the denizens of the fictional dystopia as “The Chairman”; audiences at home might recognize him by another name.

“This was not in the script, but during shooting, we got the idea of making the Chairman into Donald Trump,” Corman, who produced the film, told Inverse. “We thought of it as just a joke, and we didn’t in any way think that he was going to actually become the President. So out of the blue, we can say we have the first picture portraying Donald Trump as President of the United States. I hope he attacks us, but he might praise us. Either way, it’d be additional publicity if he hears about the movie.”

As the Chairman, Malcolm McDowell leans hard into the satire; he has a ridiculous bouffant haircut, wears a wide red tie, crows about his fame, and declares that he’s “one of the richest motherfuckers in the world. Given the events of the last three months, the world that the movie depicts is in many ways far too close for comfort, more a sober glimpse into the future than a crazy acid trip.

The original movie was a cult hit thanks to its potent mix of violence, comedy, nudity, and satire; it starred Sylvester Stallone — months before his star would explode with Rocky — and David Carradine, a beloved B-movie staple himself. And yet, it seems mild now; though it embraced a national love of bloodsport and exploitation, it could not foresee the corporatization of America or the rise of modern digital technology.

The new version more than compensates for it, portraying a wasted nation — now known as the Corporate States of America — filled with unemployed living zombies. Banned from procreating, Americans have been replaced at their jobs by robots and resigned to eat sugar-gruel as they spend endless hours wearing VR glasses and taking in ideological carnage. They live regions like Onepercentia (the Northeast), Upper Carcinogena (the Upper Midwest), and Pharmatopia (the Southwest). West Virginia has been renamed Biscuit Planet, Inc.

“Things were not that great in the ‘70s, but they’ve gotten a little worse today,” Corman said, laughing. And he certainly has perspective: He’s been prolifically directing and producing movies on extremely low budgets since the ‘50s, and even at 90 he seems to have no interest in giving up his throne as King of the B-movie. He is the man responsible for so many campy ‘50s sci-fi films, kicking off the counter-culture cinema movement, seeding HBO with its first years of movies, and leading the indie film adjustment to both home video and streaming media. Corman spoke to Inverse about his illustrious career and how he’s working to stay in the game as the rules change all the time.

Why did you decide to remake Death Race now?

It happened because an Italian journalist was interviewing me and he asked about what I thought about the fact that when Universal remade Death Race 2000 [in 2008], they used cars hitting the other cars, but they took out the killing of pedestrians, the humor, and the little bit of social commentary that’s in there. And I said, ‘I assume they simply wanted to make a straight action film, which is fine and the film’s very good.’ The journalist said that he thought they lost something by not having everything else.

I started thinking about that, and I called Universal and told them what the Italian journalist had said. And they just said, ‘Well let’s talk about this.’ We went in, we talked about it, and they said, ‘Well, would you like to remake it and go back to those elements that you thought to be important and that were taken out?’ and I said, ‘Sure!’ And so there we are.

So it was as easy as that?

It was a strange thing because we had the discussion and they said, ‘We’ll call you in a week to decide if we definitely want to go forward.’ We called the next day and said, ‘Yes, we’re going forward immediately.’ I had talked about the fact that I had a studio in Ireland at one time, but I sold it. I still have certain privileges there, and the Irish subsidy is very important. I can make the picture with a lot of savings in Ireland in the spring. They said yes.

They called the next day and said, ‘We can’t wait for spring. We want it right away. Can you shoot immediately?’ I said yes, without thinking. I wasn’t gonna say no to Universal. So I hung up and then I thought, my studio is in Galway on northwest coast of Ireland. Storms and the winter come off the North Atlantic and the first land they hit is right where my studio is. I can’t shoot this thing in winter. I started thinking about it and I thought, wait a minute, it’s summer in South America. So we shot the picture in Peru.

Shooting in Ireland and Peru helped you save money, which you’ve always been great at and it’s even more necessary now. The business has changed so much since you’ve started and impacted your business model. People now mostly stream movies or get them on iTunes. How has that changed your business?

Well, I think the business has changed in two ways. From a production standpoint, it’s gotten better. I’ve been using lightweight cameras, digital technology, computer graphics, green screen — all the technical innovations — so you shoot easier on locations, and you don’t need studios anymore. From a production standpoint, things really have improved.

From the distribution standpoint, for medium and low-budget films — which I make — it has gotten worse. When I started, every film that was at least halfway decent got a full theatrical release. Today, only the big films get theatrical releases. The medium- and low-budget films are just frozen out of theaters. Every now and then, one will break through, but in general, you pretty much know in advance that you do not to get to get played in theaters.

Universal has its own streaming platform. I don’t know exactly how it works, but I know it’ll be DVD and streaming through Universal and then to Netflix and the other platforms. I think that’s unfortunate. I liked it better when we had full release in theaters, but this is the way the business is. There’s no way to fight it; you simply have to do it.

So I imagine it makes the margins lower. You spend less on the movies, and you now make TV as well. Have you adjusted your business to that reality? Did you change the way you produce things or decide what you’re gonna make to film?

One of the differences — take Death Race 2000: You got the idea for Death Race 2000 and you immediately made the picture and distributed it. I back my pictures with my own money — which is one of the reasons they’re not big-budget films, because I don’t have that much money — but I have the freedom to just decide to make a picture knowing I was going to go into theaters. I essentially believed that my decision was correct.

Today, without the knowledge that a film is definitely going into theaters, it’s very difficult to just decide I’m just gonna make a picture because I want to make it. The avenues of distribution are to a large extent blocked. Today, I pretty much have to have a picture pre-sold in some way, which means my decision-making process is limited, because I have to anticipate where I’m going to pre-sell. I can’t gamble the way I formerly did. That is unfortunate because for me, the gambling on my decisions was part of the fun of making a film.

So when you were making those gambles, what were the gambles you were most excited to make?

Probably when I made a series of pictures of Edgar Allen Poe, which I shot entirely in studios. I always have some sort of a theory or a theme for my movies, which is something I teach to the young directors that start with me. You’ve got to have some theme, some concept behind the show, and it doesn’t even have to be correct. It could be wrong — it’s better to be correct — but it has to tie the film together. Those themes were an exciting part of all of this. The themes are less important now; simply, things have changed.

My themes on the Poe pictures were that Poe was working with the unconscious mind, so I thought I should shoot in a studio. When I decided to stop making the Poe films, they wanted me to continue, but I felt like I was repeating myself. I decided I wanted to go out into the streets in the ‘60s and film the counter-culture and what was exciting. That was the target of the films I did at that time. The first was Wild Angels about the Hell’s Angels. It had big commercial success and actually it was the opening night film of the Venice Film Festival.

The State Department protested, saying that was not a portrayal of American life. What I told the State Department is thanks for giving me lot of publicity. Then I followed it up with a picture about LSD called The Trip which again talked about the certain elements of a counterculture and weirdly enough, that film was the only American film that was invited to Cannes Film Festival that year. What was exciting was that time, those films, and being part of the counterculture.

You had a then-undiscovered Jack Nicholson write in and star in Wild Angels, along with Dennis Hopper. What do you think sustained success requires, regardless of the business model?

It depends upon the position. For an actor, it’s the creativity, the ability as an actor, I place a lot of emphasis on improvisation, even at shooting. For writers, directors, and producers it’s still that element of creativity, but it’s also a question of intelligence. Every writer, director, and producer I know who’s had a successful career has been intelligent. Somebody might have one hit and not be that bright, that are unable to stay in their career, so it’s the intelligence; but it’s important, the willingness to work hard. Motion pictures are — to large extent and up to a certain extent — a glamorous art/business but it’s also really hard work. You get worn out and you have to be prepared for that.