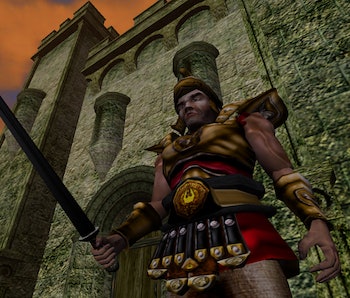 A new datamining reveal shows the island for one of Bethesda’s most famous video games, Elder Scrolls III: Morrowind, may be heading to Elder Scrolls Online as early as this year.

A redditor recently shared a datamined map of Vvardenfell, the northern island from fan-favorite Morrowind. The map indicates the area is almost complete, save for a couple of spots. Commenters analyzed that it would probably be the biggest area in ESO’s Morrowind zone, with points of interest including some of the beloved cities and ports from the classic video game. Sadly, it looks like the volcanic region of Red Mountain would not be accessible, but still, it’s impressive. If accurate, the area could end up being twice as big as Wrothgar.

Vvardenfell, home of the Dunmer, was first teased all the way back in 2012, when an ESO Support response hinted that, while Elder Scrolls Online was starting on Morrowind’s mainland, they weren’t opposed to adding the northern island in the future. Elder Scroll Online players started noticing details about Vvardenfell were being added to the game as early as May 2016, including new quests, dungeons, and three-player homes. That makes sense, since player housing is coming to ESO with the Homestead update this year.

Elder Scrolls III: Morrowind is celebrating its 15th anniversary this year, so now would be the perfect time to unveil this latest area — especially after debuting One Tamriel, which allows any and all players to quest together no matter their skill level. It could go side-by-side with a backwards compatible update for Morrowind, like what Elder Scrolls IV: Oblivion got last year. Of course, Bethesda hasn’t confirmed any of this, but they have promised big announcements after Homestead debuts in February.

More like this
Gaming
11 hours ago
19 images that prove Splatoon 3 is the Switch's most stylish game
By Robin Bea
Gaming
7.27.2022 4:00 PM
Exoprimal network test proves it needs a lot more work before 2023 launch
By Robin Bea
Gaming
17 hours ago
GTA 6 needs to radically change GTA Online — or risk destroying itself
By Joseph Yaden
Related Tags
Share: