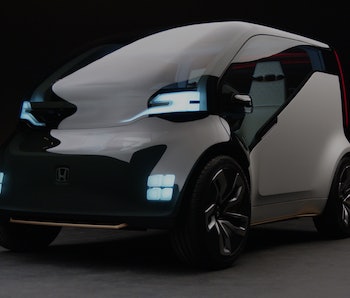 Honda just debuted a concept autonomous mini-car that can make you money — even when you’re not driving it.

On Thursday, at the Consumer Electronics Show in Las Vegas, Honda revealed the NeuV, which looks a little like a toaster from the future with oversized wheels that might have been inspired by a golf cart. It’s a concept autonomous electric vehicle equipped with artificial intelligence and features a full-touch panel interface, two seats, a storage area in the back, and an electric skateboard for “last mile” transit. Not only that, it can change the way people interact with and use their cars.

Honda hopes the autonomous NeuV will be used for ride sharing when its owners aren’t using it. That’s because, according to Honda, most privately-owned vehicles stay idle 96 percent of the time.

“We designed NeuV to become more valuable to the owner by optimizing and monetizing the vehicle’s downtime,” said Mike Tsay, principal designer of Honda R&D Americas.

The NeuV is pretty small. With just two seats, it’s five feet tall and less than ten feet long. It is boxy. And its predicted battery range — 100 to 200 miles — is designed for commuting, not road trips. (The coming Tesla Model 3 promises a 215-mile range for its five seats.)

But the NeuV can sell energy back to the electric grid when it’s not in use, an idea, along with ride-sharing, that has been touted by Elon Musk as uses for Teslas in the future. Musk has said that self-driving Teslas could eliminate taxi cabs and that excess energy from Tesla solar panels could feed a community’s power grid.

The NeuV also features the Honda Automated Network Assistant (HANA), which can make the same choices you would make. It’s equipped with an artificial intelligence “emotion engine” and automated personal assistant. Based on your mood, HANA can make music recommendations and support the driver’s daily routine.

“NeuV can learn from you, detecting the emotions behind your judgments and using your personal decisions as a basis for selecting your choices,” Matsumoto said.

Frank Paluch, president of Honda R&D Americas, Inc., also spoke about other initiatives of Honda to create a vehicle payment system. Honda has partnered with Visa, and Paluch said that paying for gas and street parking can become as easy as just touching a button from the inside of your car.

So who knows, in the near future, we might have cars that not only drive themselves and read your emotions, but also make you some money while you’re at it.