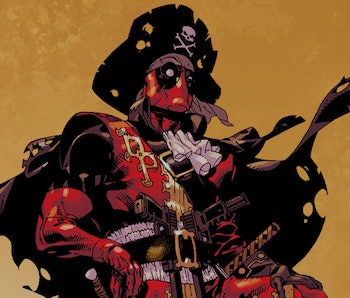 In 2016, people did as Deadpool would and pirated his record-breaking film in droves, making it the most pirated film of the year.

According to the numbers provided by torrent hosting service, TorrentFreak, people pirated Deadpool in the millions, beating out other films like DC and Warner Bros.’ Batman v Superman: Dawn of Justice, Marvel’s Captain America: Civil War, and Disney’s Zootopia. TorrentFreak revealed that while they can’t monitor each download, making precise figures unavailable, the site used public BitTorrent trackers to identify which film was the most pirated.

Not only is this a very Deadpool-like move on the part of film-watchers, but as a recent interview with Variety reveals, pirating may have helped Ryan Reynolds’ film become the global phenomenon that it was. “We were rated ‘F–k you!’ in China[,]” says Reynolds. However, numbers indicate the film was widely downloaded in the country, despite it featuring content that is banned in China.

While piracy may hurt film releases by taking away from total ticket sales, films like Deadpool which are expected to be banned from certain markets can sometimes benefit from the exposure brought by illegal downloads.

As a R-rated superhero film, Deadpool’s exposure to a bigger audience was limited thanks in part to the violence and raunchy content that helped make the film such a hit with audiences in North America. That didn’t stop savvy netizens of the worldwide web from finding copies of the film to pirate, ensuring that even countries with strict censorship laws like China could partake in the joy of Deadpool.