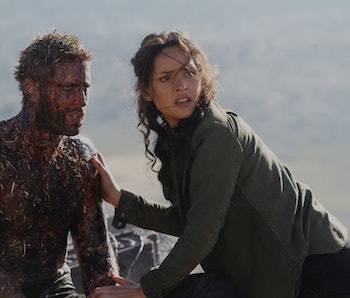 NBC’s Emerald City is the latest show in the same vein as Once Upon a Time, Grimm, and Sleepy Hollow: an edgy, modernized spin on a tale as old as time. Although its characters and tone feel like its fairytale network TV brethren, its aesthetics and politics strive to be more similar to Game of Thrones. As Once Upon a Time and GoT don’t quite appeal to the same audience, here’s what you need to know to determine if Emerald City will be for you.

The show begins in a tiny, modern-day Kansas town called Lucas. We follow this Dorothy (Adria Arjona) as she works at at a hospital and lives a small, unfulfilling life. Before long, she’s swept up in a tornado, accidentally bringing a police car and dog along for the ride. So far, so familiar — although it’s gratifying to see a nonchalantly Latina Dorothy and a black Wicked Witch of the East. Fantasy stories have free reign to make their characters purple-skinned and pansexual if they so chose — and yet far too many remain stubbornly shackled to the white, heterosexual norms of the real world. Emerald City is casually multicultural in a way that fantasy should be yet too often is not.

However, that’s where the story strays into a self-serious territory with varying degrees of success. Instead of Munchkins, Dorothy encounters a local warrior-like tribe who are in the midst of performing a death ritual. Here, Dorothy’s accidental sidekick dog get his name — as Toto is apparently the word for “dog” in their language. The tribe members all look like they took a wrong turn on the way to the set of The 100. Decked out in furs and face pain, they’re a mixture of The 100’s Grounders and GoT’s Wildings.

This wouldn’t inherently be off-putting if everything in the show was also styled in a similar gritty fashion. But the wizard is self-consciously operatic, as he’s trailed by attendants wearing silly hats. In that regard, the Oz element is far more similar to the tone of Once Upon a Time in a way that clashes awkwardly with the rest of the world. If Emerald City went balls-to-the-wall with its ridiculous elements a la Guy Ritchie’s King Arthur, it would be more fun, but it feels confused about its own tone.

Similarly, like Once Upon a Time’s version of Captain Hook, Little Red Riding Hood, Pinocchio, and Mulan, the show’s take on the Scarecrow is an almost comically hunky tortured soul (Oliver Jackson-Cohen). His search for his “brain” in the original story cleverly becomes his search for his memory here, as Dorothy discovers him on a cross. After helping him down, she learns that he remembers nothing about his life or identity.

It ultimately makes for an awkward combination to blend the occasionally silly yet self-serious sensibilities of Once Upon A Time with an epic Game of Thrones aesthetic that the plot and characters can’t quite measure up to. But if you are a fan of the former, this show is for you, as it’s got a similar vibe with a lush, sweeping backdrop. As it was filmed in Spain and Croatia, and it’s a network show with a cable aesthetic. Emerald City doesn’t add anything new or urgent to the television landscape — even its diversity-infused fantasy, while commendable, will be expanded upon in the more-daring American Gods. But Emerald City is still a pleasant divergence down a yellow brick road if you’re in the mood to follow the path.