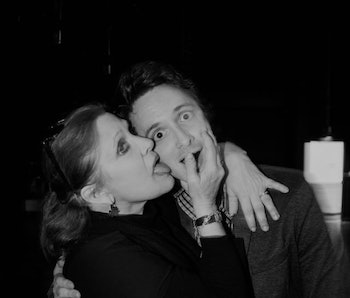 Since Carrie Fisher’s death on December 27, fans, friends, and family alike have been crawling out of the woodwork to celebrate the late icon and share tales of her already storied life. The latest to do so is Fisher’s former assistant of three years, Byron Lane, who now works as a writer and director. He shared some of his favorite memories of his former employer in a wholly loving and humbled Facebook post on Tuesday.

Of course, Fisher’s beloved service dog and constant companion, Gary, was mentioned, as were the Northern Lights, dog sleds, and koalas. He ends the post with a promise that Fisher was exactly the same in person as she was as a distant celebrity — “Authentic. Honest. Real.”

“Her nicknames for me were Byronius and Cock Ring. She once got a text alert from weather.com saying the northern lights were gonna be big… so that night I had to book flights and the next day we were there. When Gary had to pee on a plane she took him and a wee-wee pad into the lavatory and how they worked it out is one of life’s great mysteries. Most of my time with her involved me staring at her, wide-eyed and in blissful shock that one person could live a life so fully. We rode dog sleds in Canada, swam hot springs in Japan, pet koalas in Australia. That’s how she lived. Extraordinary. Brilliant. Hilarious. And generous! Not every assistant job is like that. I was with her for nearly 3 years. Every moment is a treasure, inspiration. I love this woman and will forever. She has been a force in my life from the moment I met her. To this day I think of her constantly. Every memory with her is bursting with color. I feel so lucky, you guys! So! Lucky! But, you know her, too. Because she was exactly the same in private as in public. Authentic. Honest. Real. A champion for mental health, veterans, feminism. She did anything for her family, loved her friends, embodied aliveness. I’ll miss her so, so much.”

Perhaps the only positives to come out of Fisher’s death are these stories. And, like Lane, the world clearly feels lucky to have had her around for as long as it did.