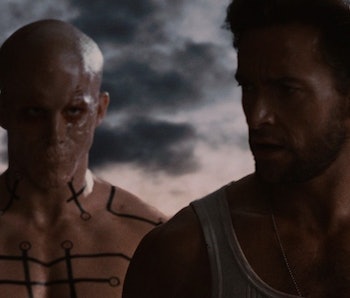 There’s a rumor according to a secret source at The Wrap that says David Leitch, the director of John Wick and the upcoming Deadpool sequel, has shot a Deadpool scene for the the upcoming Logan, and honestly, fans of both characters should be a little wary.

The scene is rumored to be a post-credit tag, which alleviates any worry that Deadpool will play a part in the proper Logan film. And while it makes sense to include one of Fox’s most popular superheros in one of its most anticipated superhero movies, seeing Wolverine and Deadpool together again just doesn’t make any sense.

This post has been updated with Ryan Reynolds’s response to the rumors.

As you might recall, this would be the second time that Ryan Reynolds and Hugh Jackman play these characters in a Wolverine movie. It was … very bad, as 2016’s Deadpool is quick to point out. However, it’s not the thought of a X-Men Origins: Wolverine redux that is worrying. It’s what this means for the already confusing X-Men cinematic timeline.

There’s no doubt that David Leitch and James Mangold are keenly aware of X-Men Origins, and will likely use the new creative wind from Deadpool and Logan to avoid any unfortunate callbacks to the first Wolverine solo film.

But this rumor introduces a host of complications that isn’t just related to the drastically different cinematic tone put forward by the two films. If the events of X-Men Origins were erased thanks to the timeline overhaul in X-Men: Days of Futures Past, then Deadpool and X-Men: First Class largely serves as the first films in a new timeline. So where does that leave Logan? With the rumor of Deadpool appearing in the movie, it’s anyone’s guess at this point.

Likewise, Wolverine and Deadpool share a long comic history, both having come out of the Weapon X program. However, the reason why the Deadpool movie worked so well was because it established Deadpool as a comic book movie, while everything we’ve seen of Logan so far confirms it as a finale of sorts for Hugh Jackman. To see these two interact in the same film threatens the integrity established by both films so far.

And while the Hugh Jackman jokes worked in Deadpool, it was largely because Deadpool’s relationship with Wolverine has always been best when kept in a light and jovial tone. Most of Wolverine’s dark stories like Death of Wolverine and Old Man Logan rarely feature (or even mention) Deadpool.

Still, with all the previews of Logan pointing to a confident Wolverine solo film, and the creative dynamo that was 2016’s Deadpool, if the rumors of a Deadpool scene in Logan are true, it will probably end up being nothing like what people are expecting.

Update: The rumor was dashed by a simple tweet from Ryan Reynolds:

More like this
Entertainment
6.15.2022 11:00 AM
15 years ago, Fox made the best Fantastic Four movie ever — it still stunk
By Jon O'Brien
Entertainment
6.22.2022 11:30 AM
Marvel’s Kevin Feige teases a fix for Phase 4’s biggest problem
By Eric Francisco
Entertainment
6.23.2022 4:31 PM
Doctor Strange 2 producer reveals a genius Easter egg that everyone missed
By Alex Welch
Related Tags
Share: