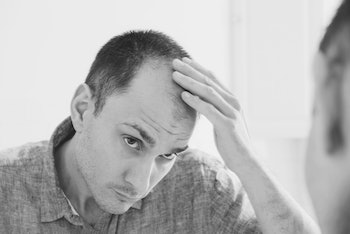 For many men, the onset of hair loss flags the terrifying beginnings of physical decline.

Those who choose to embrace their baldness, however, will discover a silver lining: A hairless scalp doesn’t get goosebumps. Gone are the days of prickled skin revealing secret fears and anxieties. Thanks to an “evolutionary hangover,” new research shows, bald heads are the equivalent of a poker face.

In a new study published in Anatomical Science International, a team of researchers report that they’ve discovered a new function for the arrector pili, also known as the “goosebump muscle.” These tiny muscles are attached to every hair follicle — the sheath of cells at the base of a hair’s root — and when they’re pulled taut they draw their hair back with it, causing it to stand on end and creating a goosebump in the process. When people go bald, their hair follicles lose their attachment to the goosebump muscle — hence, no more goosebumps.

“You can’t get goose bumps on the scalp when you go bald and you can’t regrow hairs either because the follicles can’t regenerate,” said dermatologist Rodney Sinclair, Ph.D., the head of dermatology at the University of Melbourne, in a statement.

Goosebumps are usually thought of as a leftover from our evolutionary past. While our ancestors had to puff up their fur to stay warm or look scary in the face of dangerous threats, we now have less fur, clothes to shelter us, and weapons to keep us safe. The goosebumps remained, however, and still show up when we’re cold or feel emotional threats like nervousness, fear, or deep love. They show up wherever we have hair — which is everywhere but a bald person’s head.

Sinclair wasn’t studying the goosebump muscle in order to explain away their absence in bald people; instead, he was hoping that understanding its function could show him how to someday cure baldness altogether. What he found is that part of the reason the goosebump muscle exists is to create a little cavity at the base of the hair follicle called a “stem cell niche,” which, as its name suggests, is where the hair follicle’s stem cells proliferate.

Hair follicles are unique because they’re one of the only kinds of cells that can completely regenerate — that’s where the stem cells come in — which is what allows a hair to grow back after it’s plucked out. But in bald people, the hair follicle has lost its attachment to the goosebump muscle and the stem cells it shelters, so neither the follicle nor the hair it normally pushes out can regenerate.

If scientists can figure out the mechanism that leads to the detachment of the goosebump muscle from the follicle — and its eventual destruction — then they might be able to figure out a way to stop it from dying and causing baldness. Sinclair is also hoping his research on the stem cells protected by the goosebump muscles can also be applied to help stop the spread of skin cancer and to treat burns.

In the meantime, bald people should own their hairless, goosebump-free scalps with the confidence of Vin Diesel. While you may not have hair to keep your head warm, at least nobody will be able to tell how cold you are.