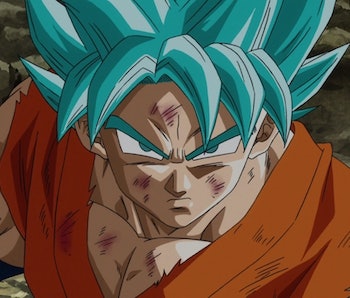 Who wants to bet Goku is glad he decided to keep training after fighting Majin Buu? Yesterday, Cartoon Network released a short English language trailer for Dragon Ball Super, which premieres Saturday on Adult Swim. Though the trailer doesn’t reveal any of the fighters from the still-unknown universes, it does stress Beerus’s role in the series’s newest arc.

The trailer opens with a weird Iron Man reference when Mr. Satan bastardizes Tony Stark’s “I have privatized world peace” into “I’m proud to say peace on earth is officially permanentized” (sic). Then, we remember Goku reasoning that because Majin Buu’s power surprised him, he’ll benefit from training in the off-season, just in case someone else beefy shows up. Well, Dragon Ball Super proves Goku right tenfold, introducing a huge multi-universe showdown between heavyweights.

Universe 7 will obviously be protected by Goku, Vegeta, Gohan, Master Roshi, Android 17, Android 18, Piccolo, Buu, Krillin and Tien. We’ve already seen the purple inhabitants of Universe 6, and two of the powerful folks from Universe 10 (Zamasu and Gowasu) but the fighters who will represent the other nine universes are, so far, unknown. It appears Beerus is still on the hunt for a worthy adversary, though.

Watch the entire clip below.