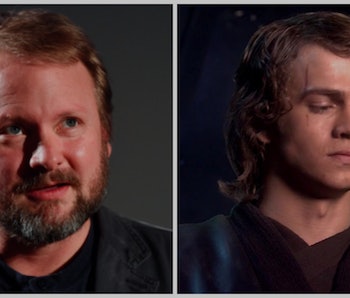 The ghost of Anakin Skywalker can still teach us a lesson, at least according to the director of Star Wars: Episode VIII. Responding on Twitter to fans complaining about Episodes I-III, Rian Johnson offered a different way to embrace and appreciate the divisive George Lucas-directed films.

Claiming he was playing “Devil’s advocate,” the Looper director said “… the prequels are a 7 hour long kids movie about how fear and loss turns good people into fascists.” While this statement is offered diplomatically, it does present a clear-eyed (if a little backhanded) way of appreciating the prequels. Which makes sense considering Johnson’s position as the director of the next installment in the complicated Star Wars saga. He can’t very well make a cohesive Star Wars film if he totally ignores the existence of the prequels.

After all, a major character of the new films is Anakin Skywalker’s grandson, Ben Solo. And the prequels give a writer and a director plenty of insight — albeit heavy-handed — about who Anakin Skywalker really was.

Speaking to the Daily Beast, Kylo Ren/Ben Solo actor Adam Driver praised Johnson on December 24, saying, “… he [Johnson] understands the importance of ambiguity and nuance. He wrote something that I think is remarkable.” Nuance and ambiguity probably are another thing Kylo Ren has in common with Anakin Skywalker. This is just one more reason for Rian Johnson to be defending the prequels: tonal consistency.