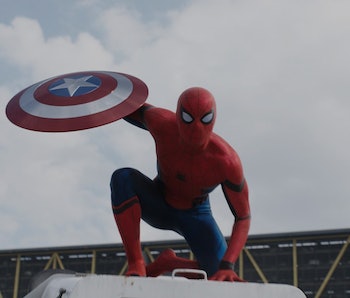 Spider-Man does whatever a spider can, and apparently, if his performance in Captain America: Civil War’s epic airport fight scene is anything to go by, spiders can kick a lot of ass. A Marvel fan broke down exactly how many different fighting styles Peter Parker knows in a YouTube video — there’s lots of jumping and kicking and not a lot of punching.

User Godzillarex, who has also done fight style breakdowns for Daredevil and Batman, analyzed the big fight scene and found that Spider-Man used aspects of six different techniques during his acrobatic battle. The first one is a little unexpected, but makes perfect sense: action shooting. Spidey fires off his web-shooters with perfect accuracy while leaping through the air, so he’s quite the dynamic marksman.

Spider-Man is also an accomplished gymnast and weightlifter, two Olympic events that can easily lend themselves to combat. Godzillarex noticed that Spider-Man never throws a punch in the big showdown, but he uses plenty of kicks which make up the basics of Tae Kwon Do. Some of the flashier moves — like drop kicks — are straight out of pro wrestling, and Spidey uses Brazilian jiu-jitsu to break out of Falcon’s grip at one point.

Keep in mind that he’s also got spidey-sense, near-perfect reflexes, and super-strength on his side too. Spider-Man is a force to be reckoned with.

Godzillarex notes that, in the comics, Spider-Man creates his own martial arts style, the Way of the Spider. The Peter Parker in the MCU is just starting out, so it seems doubtful that he’s had time to invent his own techniques. However, as this breakdown shows, he’s managed to cobble together a formidable arsenal of fighting styles on his own.

More like this
Entertainment
6.15.2022 11:00 AM
15 years ago, Fox made the best Fantastic Four movie ever — it still stunk
By Jon O'Brien
Entertainment
6.22.2022 11:30 AM
Marvel’s Kevin Feige teases a fix for Phase 4’s biggest problem
By Eric Francisco
Entertainment
21 hours ago
Guardians of the Galaxy vol. 3 leak reveals one MCU hero's happy ending
By Alex Welch
Related Tags
Share: