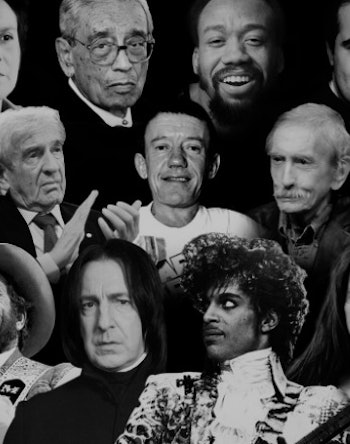 The deaths of Star Wars icon Carrie Fisher and pop star George Michael felt like two final twists of the knife in a year that has seemed like an endless parade of beloved celebrity deaths. Blaming the calendar for the loss of so many beloved figures has become a gloomy, gallows humor meme, but like everything else on the internet, it does feel sort of suspicious. Are we being dramatic, or has 2016 actually been a cursed year for pop stars and the people who spend time idolizing them? Here’s a very scientific investigation into this pressing question.

Question: Were there really more celebrity deaths this year?

Hypothesis: There were more celebrity deaths than usual this year, the impact of which have been amplified by social media.

Conduct An Experiment: Okay, let’s look at the extended obituary that has been this year. Some high profile deaths include:

Seems like a lot. Sure, a human life is a human life and technically, no one is more valuable than another… but let’s be real, these people are celebrities, so only their deaths get to become special statistics. According to Linnea Crowther, the lead obituary writer for Legacy, there has indeed been a spike of high profile deaths this calendar year.

A study conducted by the BBC cites similar results of an increase in celebrity deaths, and suggests that it tracks with the evolution of mass communication. The author of the study, Charlotte McDonald, explains that this is partially a result of us now being over a half century removed from the flourishing of both TV and pop culture in the 1950s and ‘60s, which massively expanded the overall pool of public figures. The majority of those who passed this year were indeed figures who rose to prominence mid-century and now, logically, are approaching the end of their lives.

And then, when celebrities who pass are unusually young — George Michael, for instance, was only 53 — that ordinarily tends to lead to more news coverage and social media engagement.

The younger the celebrity and the more sudden the death, the larger the shock and cultural impact tends to be. Hey, the twenty-seven club isn’t legendary without reason. The cause of death, and whether the public expected it to happen, also factor in our reactions; a celebrity having a heart attack or suffering an overdose is more of a shock to the public rather than them succumbing to a long-standing illness or old age.

The way that we grieve also amplifies the perception of the year. In addition to the twenty four hour news cycle, many use social media outlets to express their personal memories and attachments to celebrities; before the internet, that was relegated to talking in person and pulling from magazines and newspapers.

“All these reactions can be viewed as well as ways of managing death in societies where actual death and the corpse are hidden away and seldom experienced firsthand but rather through Game of Thrones and CSI,” National University professor and celebrity death expert Jacque Lynn Foltyn told Inverse. “Funerals are more rare as memorial services have become popular. For some, social media is the virtual memorial service when they cannot attend, making a death an international event.”

Foltyn also suggests that not only does social media make us more aware of these deaths, but fundamentally changes the way we process them.

“Social media amps up the way we process high profile deaths, far beyond the proverbial water cooler,” she said. “There’s an international community of mourners who instantly connect with one another through social media. Because the death is ‘trending,’ some immediately post before processing what the death actually means to them.”

While there wasn’t a significant spike in social media users and engagement in 2016, the numbers did indeed continue to jump from the previous year. Over 317 million are now registered on Twitter, and Facebook experienced a more significant raise in users, with over 250,000,000 new accounts, likely leading to an increase in those reacting to a high-profile death.

And as more people talk about death online, the more morbid the conversation becomes.

“The mournathons are expected,” Foltyn said. “But what intrigues me is how social media and other internet venues quickly move on to speculation about the causes of death. There’s a need to explain why the person died, to turn the cause of death into a forensic mystery or medical mystery tour.”

Draw a conclusion. It’s not all in our heads — there’s been a lot of tragic celebrity death this year, but the way that we deal with it is certainly evolving. The need to be included may spur social media users (so, nearly everyone) to participate in a cultural event they wouldn’t have otherwise.

Well, gang, we have a few days left, and people are filing their predictions like it’s a horse race. I’m on board with Eric Andre’s guess: