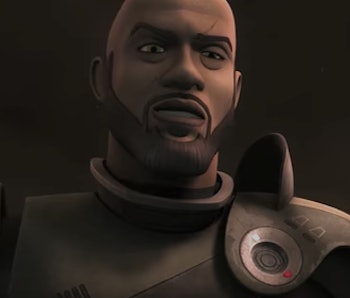 Why Saw Gerrera broke with the Rebel Alliance and was later branded an “extremist” will be partially depicted on Star Wars Rebels. And, the character will now be voiced by Rogue One actor, Forest Whitaker.

Mild spoilers for Rogue One ahead.

A freedom fighter from the planet Onderon during the Clone Wars, Rogue One depicted Saw as a paranoid, weathered and rebellious terrorist hellbent on destroying the Empire no matter the cost. Because Rebels takes place a few years before the events of Rogue One, Saw will have yet to become entirely disillusioned and doesn’t yet have robot legs. In a new clip, upon seeing Kanan and Ezra, Saw says, “I never thought I’d see another Jedi, much less two.” In all likelihood, the last Jedi Saw laid eyes upon were Anakin Skywalker and Ahsoka Tano.

Dave Filoni, the executive producer of Rebels, said this of Whitaker’s performance on the animated series: “Forest did a great job of capturing Saw in a way that he is both a bit mad, a bit crazed, a bit afraid … but also, a bit sympathetic. He sees something coming and no one will listen to him.” Filoni also confirms that though Saw “doesn’t have a name for it it yet, this is the Death Star.”

The last four episodes of Rebels Season 3 will air from January 7 to January 21, starting with the two-part episode “Ghosts of Geonosis,” a reference to the planet in Attack of the Clones where the Death Star plans are first glimpsed.