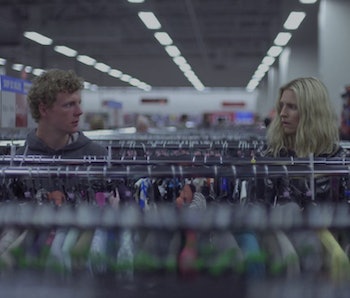 Although Netflix’s The OA has many astonishing mystical aspects, one of its most captivating elements is its real world characters. Over the course of the show, four misfit teen boys (Steve the angry fuck up, Jesse burn-out from a broken home, French the first-generation athlete and star student, and Buck the artsy trans boy) and their teacher Betty form a sort of mystical Breakfast Club that rallies around Prairie (Brit Marling).

While the line between truth and fiction is called into question in her own journey, her true achievement is to help these characters experience their own sense of growth and fulfillment.

French (Brandon Perea) forges an unlikely friendship with Buck (Ian Alexander), and by the end of the show, both boys are more secure in their own identities and more comfortable with their uneasy home lives. They also have the most overt connections to the lost souls in Prairie’s story, with visual nods to Homer and Rachel.

While we don’t know what happens to Jesse and Buck definitively — they seem younger than the others and most likely have a few more years of high school to cover — we do know that French got a massive scholarship and is all set with a free ride to any college in Michigan. Whether OA’s journey inspired him to reach even farther, perhaps even all the way to Harvard like his mom wants, is still up in the air.

Steve finds himself bonding with downtrodden teacher Betty (Phyllis Smith), who is without a doubt the show’s MVP. She’s perhaps the person who believes in Prairie the most, and coins herself BBA, inspired by Prairie’s alterego OA. Also she once ended phone call by saying “I’m eating a sandwich!” which is just delightful.

Betty and Steve’s relationship is the heart of the show, as they’re the two characters grow the most. At the beginning, Betty is a lonely woman grieving and guilt-ridden by hear brother’s death. She’s also ready to kick Steve out of school. Steve (Patrick Gibson) begins the show in the worst position. He’s angry and impulsive, dealing drugs out of an abandoned house and punching his fellow students simply because he feels like it. He sics his dog on Prairie, punches holes in the walls of his house, and is both a dipshit and a loose cannon. His only ambition is to make workout videos. At their wits end, his parents ship him off to a harsh military school.

Betty intervenes and rescues him, using money from her dead brother’s estate to pay off his captives. It has a full circle feeling, as she’s able to rescue one lost young man as karma for the one who slipped through her fingers.

Steve uses his natural inclination to teach (remember those work out videos) to help the group learn the dance moves required for dimensional travel. He also discovers a group of people who for the first time in his life, are willing to listen.

The end, which involves the group banning together to use the dance on a school shooter, will be polarizing to viewers. But when Prairie tells the group it worked and she can feel herself traveling, Steve seems to hear the whooshing sound as she’s being carted off in an ambulance with a gunshot wound. Steve is left wishing he could travel with her, and Betty it seems, is also leaving him behind to forge a new life for herself out west after being fired for her erratic behavior.

For a show about dimensional travel, it’s the ordinary and very human friendships between a cast of characters that society overlooks that’s the real backbone. We’ll anxious be waiting for a second season to see what happened to them all.

More like this
Entertainment
22 hours ago
Frankenstein is returning to the Hellboy universe in a post-apocalypse adventure
By Jeff Spry
Entertainment
13 hours ago
She-Hulk release date, cast, plot, and trailer for Marvel’s Disney Plus show
By Mae Abdulbaki and Mike Bloom
Entertainment
5.17.2022 11:00 AM
Kate Siegel says Netflix’s Fall of the House of Usher is “like nothing anyone has ever seen”
By Dais Johnston
Share: