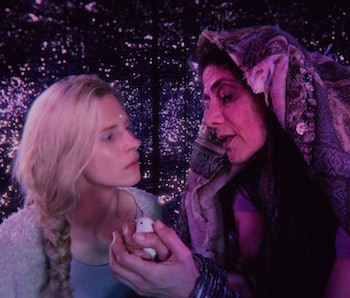 The following contains spoilers for Netflix’s The OA.

Netflix’s new show The OA can be read in several ways. If you think Prairie made up her experience, it’s a straightforward trauma narrative underscored by a fairytale in the same vein as Pan’s Labyrinth. If you think her FBI therapist planted the books beneath her bed to throw off her “real world” friends, it’s a supernatural conspiracy story like Stranger Things. And if you think French’s moment in the mirror with Homer was a sign of one dimension leaking into another, it’s a cerebral sci-fi story like Westworld. But whether or not you buy into its story as “reality,” its most overtly fantastical sequence involve Prairie (Brit Marling) visiting a liminal space between life and death during her Near Death Experiences. There, she talks to a mystical spirit-guide woman named Khatun.

She first encounters Khatun after drowning as a child in Russia, back when her name is Nina. Khatun cradles her lovingly, takes her sight and sends her back to her father. The OA’s creators have not taken as stance on whether this should be interpreted as “real.” In a recent interview, co-creator Zal Batmanglij said, “We based a lot of that stuff on actual accounts of near-death experiences, because those experiences do often mirror magical realism.”

The OA presents Khatun as an amalgamation of different traditions: She sits in the middle of floating galaxies, which calls to mind the nephilim in biblical mythology. The name “Khatun” is Arabic, she wears parts of what appear to be Saris, and the braille markings on her face are in German. According to one Reddit user, the braille translates to angel and shepherd.

Angel, of course, corresponds to Prairie’s self-appointed title as the OA, or Original Angel.

When Prairie meets Khatun again in the fourth episode, she’s living in a hut, which also evokes the Baba Yaga, a crone from Russian folklore. Khatun’s mild-mannered demeanor clashes with the Baba Yaga’s harsh personality, but curiously, some legends say she is the Devil’s grandmother. Recall that Prairie presents her father as a man who works in mining, is intwined in the Russian criminal underworld, and is determined to beat the cold. These are all rather devilish qualities. Further, Prairie often wears a sweatshirt with a wolf on it, which represents the Slavic god of the underworld, otherwise known as the devil.

While the show does not directly make this connection, Khatun’s patchwork quilt of religions and cosmologies leave the door open to invite the viewer in. After presenting Prairie with a sort of “red pill/blue pill” situation in the from of a bird, Khatun gives Prairie the Movement that enables her to travel between dimensions. But curiously, she’s nowhere to be seen when Homer has his own NDE.

Is this a sign that Homer is not real? Or is everyone’s NDE personalized? Like everything in The OA, it’s left to the viewer to parse out.