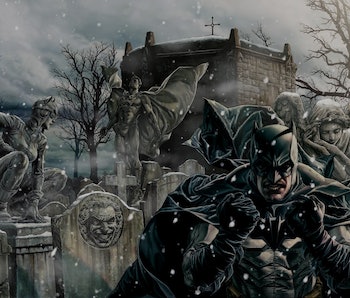 Holiday specials are a kind of low-hanging fruit for storytellers. The joy of Christmas, peace on Earth, Santa Claus is maybe real, yadda yadda — you get the idea. There’s a reason TV specials and Hallmark movies feel more like a novelty item than something to enjoy during the other 11 months of the year.

But comic books represent an exception. The medium’s bold and boundless imagination have spawned a few, but not insignificant, comic books and graphic novels that upend Christmas Special tropes in favor of something provocative, bizarre, and on the rare occasion, legitimately genius. Here are just five of the most bizarre Christmas comic books to pick up for the season, and I guarantee you won’t find any of this on primetime.

In an interview from the comic’s initial release, Bernstein reasons that Santa’s knowledge of who’s naughty and nice and his unbelievable stealth and home infiltration make him suitable for P.I. work.

Jarringly serious and absurd, Santa Claus: Private Eye casts the joyful man in red in a new light: a grizzled, overworked investigator who’s seen way too much of this weary world.

The real St. Nicholas was born in what is near modern day Turkey, but his most popular imagery (before Coca-Cola got involved) comes from the mythological figure Sinterklaas. It’s these roots acclaimed writer Grant Morrison drew upon for his recent indie smash Klaus portraying Santa Claus as a charitable vigilante while looking like Thor cosplaying Khal Drogo in a pseudo-medieval period setting.

Klaus made its debut last year and was recently re-released in a special hardcover collection. A follow-up series, Klaus and the Witch of Winter will begin releasing on December 21 this year.

Marvel’s newest holiday novelty Ghost Rider X-mas Special is written by none other than hip-hop’s biggest Ghost Rider fan, Method Man. It isn’t good, traditionally speaking, but for $1.99 it delivers on a amusing, jarring tone of Christmas cheer and dark as hell (no pun intended) Ghost Rider action. Where else can you see Krampus get chased down by Ghost Rider’s Hell Charger?

It’s absolutely fitting that Krampus would square off against Ghost Rider, but the art is also oddly bright, colorful, and clean for what could have been Marvel’s most hardcore Christmas comic in history. Still, $1.99 ain’t bad to see Ghost Rider straight up choke and burn Krampus in front of children and Santa Claus.

2. The Last Christmas by Gerry Duggan and Brian Posehn

Imagine Christmas after the apocalypse. That’s The Last Christmas, where a third World War left the world devastated all while Santa Claus, undergoing a personal crisis, had abandoned his yearly duties. But there’s still one child who believes in Santa Claus, and now it’s up to them to save Christmas. Fans of B-horror like Army of Darkness will be right at home with The Last Christmas, a holiday horror romp from one of the most prolific Deadpool writers around.

Riffing on Charles Dickens’s A Christmas Carol is one of the least inspiring things anyone can do … unless you’re Lee Bermejo and can use Batman as a dark analog to Scrooge. In Bermejo’s 2011 graphic novel Batman: Noël, the iconic structure of Dickens is borrowed for a new story told by one of Joker’s many henchmen.

In breathtaking illustrations from Bermejo and colors by Barbara Ciardo, Batman meets his own “ghosts” of Christmas Past (Catwoman), Present (Superman), and Future (The Joker) while he comes to terms with the loss of his former Robin, Jason Todd (who died in Jim Starlin’s 1988 arc A Death in the Family). Moody and dark but not without hope, Batman: Noël is a quintessential comic for any time of the year.