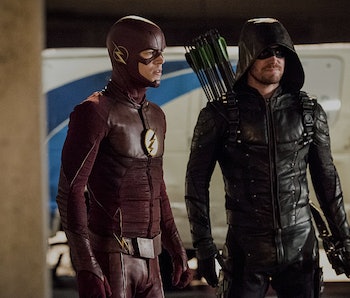 When a TV show like Arrow spawns a whole interconnected universe, there’s no shortage of jokes to go around. While the grumpiest grump Oliver Queen is a no-nonsense vigilante superhero as the Green Arrow, his actor Stephen Amell welcomes fan enthusiasm by collecting and sharing memes every Monday on his personable, and consequently super popular, Facebook page.

Regular targets for meme-ry were Barry resetting the timeline, the Green Arrow wanting to beat up anyone who touches Felicity, and Supergirl just being so gosh darn adorable. Some memes also referenced real-world incidents: In January, a convention in New Jersey was postponed to July due to a blizzard, trapping some of the attending stars under snow and adoring fans in hotel rooms. Other jokes included Amell getting injured, a saucy photoshoot between series regular Emily Bett Rickards and Arrow alum Colton Haynes, and a viral Reddit meme featuring the Flash looking a little down.

Amell kept his #MemeMonday weekly appointment up for all of 2016, so together with some fan posts found on Tumblr, Twitter, and Instagram, below are the 30 of the best and funniest memes celebrating Arrow, The Flash, Supergirl, and DC’s Legends of Tomorrow. After the blockbuster success of the CW’s crossover event “Invasion!” certainly some good humor are in order.

28. All superheroes do Crossfit. Duh.

24. Remember when The Big Bang Theory did Flashpoint?

Earlier in 2016, a Redditor uploaded a picture taken on the set of The Flash showing Grant Gustin, in costume, sitting on a curb in between takes. The unintentionally sad image wound up on Reddit as a viral Photoshop Battle. Here are some of the best.

18. “How The Flash Spent Spring Break” By Iris West

14. Here’s a crossover no one expected.

10. Just waiting for his friends.

In 2016, Canadian-born Stephen Amell was approved for permanent residence in the United States, and a fan commemorated in a rather appropriate way.

8. It’s terrible on the knees.

7. When Trump was elected, it truly became the darkest timeline.

And fans have been asking Grant Gustin to fix this too.

5. What’s the real difference between Arrow and The Flash? Well …

3. Seriously, Barry, get your shit together.

DC TV returns on January 23 with the return of Supergirl.