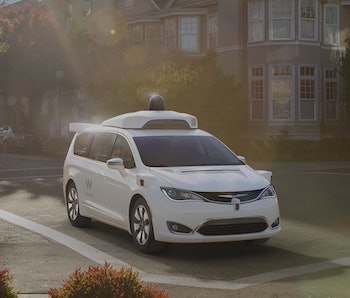 Waymo, the company borne out of Google’s self-driving car project, has just given the public its first look at a Chrysler Pacifica Hybrid minivan fitted with the company’s self-driving technology. Waymo operates under Google’s parent firm Alphabet and has been working with Fiat Chrysler Automobiles since May to fit the technology into the vehicles, switching to full production in October with an aim to produce 100 minivans fitted with the technology.

“Getting from program kickoff to production and full vehicle assembly in half a year is a testament to the strong teamwork and collaboration between FCA and Waymo engineers,” John Krafcik, CEO of Waymo, writes in a blog post published Monday.

The Google self-driving car project has been in operation since 2009, and grew to become one of the best-known efforts towards achieving that goal. The world’s first fully-autonomous trip without a driver was completed by Waymo back in October 2015, and the company has now started pushing for ways to commercialize the technology.

Krafcik claims that the vehicles will hit the public roads in test markets by 2017. When this happens, Waymo will collect data to learn more about how people use the technology, potentially as a stepping stone towards more refined uses for the tech further down the line.

The minivan represents an important step in self-driving car development. It allows for a number of use cases that traditional cars may not be as well-suited for. Families can use the cars to pick up large grocery orders, or big groups of friends can all pile into one car to save time and space. Minivans are unlikely to get anyone’s heart rate going, but their unique use cases will likely provide better data about previously-unexplored uses for the technology.

Waymo isn’t the only game in town, but its aim to get the vehicles on the roads next year places it pretty far ahead of competitors. Tesla is aiming for self-driving car technology in its vehicles by the end of next year, while Volkswagen’s new subsidiary Moia is aiming to get self-driving rideshare cars on the road by 2020.

The company has been hard at work to get the Chryslers road ready, conducting over 200 hours of extreme weather testing and testing at both Google and FCA centers. The moment of truth is almost here, where the public will get to witness Google’s years of hard work in action.

More like this
Innovation
9 hours ago
50 years ago, the U.S. and U.S.S.R. joined forces to ensure astronauts could survive in space
By Allie Hutchison
Innovation
5.23.2022 9:00 PM
How a genetically-engineered tomato could help solve a global health crisis
By Claire Cameron
Innovation
5.21.2022 2:30 PM
46 years ago, one video game innovation modernized the industry — and traumatized a generation of gamers
By Zack Kotzer
Related Tags
Share: