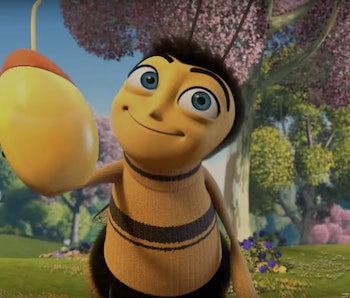 The Bee Movie was released in 2007 to middling reviews from critics who wanted arthropod Seinfeld and got a superficially banal kids movie instead. And, for a decade, that was pretty much that. A mediocre movie rocking a 51 percent rating on Rotten Tomatoes faded into obscurity on account of its own mediocrity. Then there something unexpected happen: The internet exploded with a swarm of memes featuring lead bee Barry B. Benson. Perhaps because of its alienating cheerfulness or its apparent ignorance of its own peculiarity, the movie became a weird internet infatuation, receiving the sort of attention normally reserved for Lynchian masterpieces.

Bee Movie was always strange. The film is about a honey bee saved by a New York City florist named Vanessa (Renee Zellweger). As the two form a romantic connection — yes, that happens — Barry finds out humans exploit his kind to make and sell honey. He then decides to sue them and it becomes a legal drama and, to some degree anyway, a film about reparations. Is it a post-modern triumph or commercial blunder? The movie is hard to categorize, which is what endears it to its newest fans.

“I just started making a lot of Bee Movie jokes because the movie is so absurdly funny. The whole concept, there’s nothing like that,” says meme artist James Nielssen. “It’s so easy to apply your own joke inside the Bee Movie framework. It’s the perfect storm of weirdness. It’s funny, satirical, and ironic. Any joke can be made.”

Nielssen’s mashup of Bee Movie and “All Star” by Smash Mouth, a band that has also found newfound relevancy online, went viral in late 2016. Other creators made similar work. In a sense, this was a reaction not just to the movie itself but to the realization among millennials that they’d been shown a truly odd movie as children and thought nothing of it. The Bee Movie memes are all, on some level, expressions of disbelief. And disbelief begot disbelief. Though screenshots of the film had started popping up on Tumblr, Twitter, and Reddit all the way back in 2013 and using the entire Bee Movie script as a copypasta (a block of text that’s copied and pasted often for spamming or trolling purposes) became semi-prevalent in 2015, a critical mass of Bee Movie criticism was only achieved in late 2016. This may have been thanks to a t-shirt made by a woman from Texas named Madison, which featured the whole script.

Now, the Barry B. Benson is a Capra-esque online hero like Shrek and Sonic, both of whom have had late career resurgences as the subjects of recontextualized memes.

Barry and Vanessa’s comeback didn’t stop there. The outrageousness spiked, with fans like Nielssen creating Bee Movie remixes that sparked a persistent video meme. The original appears to have been cut by comedian Darcy Grivas, who uploaded “Bee movie trailer but every time they say bee it gets faster” to YouTube. Strange edits caught on, as people began plugging in various other footage to the trailer and movie whenever the word “bee” is uttered; ludicrous spins like “The Bee Movie But Every Bee Is Replaced With Yee” and “bee movie trailer but every bee is replaced with you like jazz and it gets louder and it zooms in” started appearing online.

“Jazz and it gets louder” didn’t take the internet by storm, but it did get 93,000 views on YouTube. That was low for the re-cuts, which were — among other things — incredibly time-consuming to create.

“I try to use both music and video in my work, says Nielssen. “I was wondering how I could use Smash Mouth, how do I get all those into one. That was the next logical step. It wasn’t a huge creative endeavor, but more ‘Lets think of something ridiculous.’ You have to think of something weirder or funnier, you want to build on top of other people’s funny.”

The video remixes have slowed down, but they haven’t come to a standstill. After neo-Nazi Richard Spencer was punched soon after Donald Trump’s inauguration, one YouTube treated people with “Bee movie trailer but every time they say bee it’s replaced with Richard Spencer getting punched.”

Perhaps the most talked about Bee Movie riff of 2017 was the very serious allegation that Trump had taken a note out of wife Melania’s book and plagiarized Barry B. Benson for his inauguration ceremony speech. An image comparing the two’s words circulated widely through meme lovers’ feeds.

However, a quick fact check of the Bee Movie script proves that the president did not copy the famous bee. It was the scandal that the internet wanted to see, but, alas, not real.

It’s unclear what the next swarm of Bee Movie memes will be or what animated movie might recapture the internet’s heart. For now, Barry B. Benson and Vanessa’s love story seems to resonate because, at the end of the day, we’re all human … or not.