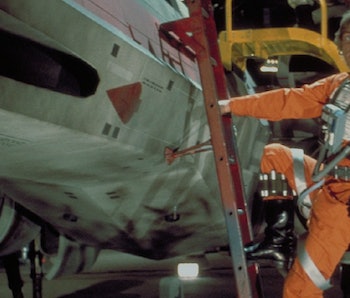 In addition to surprise appearances from very familar characters from the past of Star Wars, Rogue One also explains a very big detail in the life of Luke Skywalker. Specifically, we learn why the Rebel Alliance needed him to fly in the Battle of Yavin in A New Hope.

Mild spoiler alert for *Rogue One.

Amid the desperate space battle above the planet Scarif, both Red Squadron and Gold Squadron from the very first Star Wars movie are glimpsed once again. Red Leader and Gold Leader make cameos, though there’s sadly no sign of Biggs, Wedge, or Porkins. But, we do figure out exactly why Luke Skywalker was given the call sign “Red 5” during the famous Death Star attack run in A New Hope.

The pilot chatter makes it a big deal to mention numerous times that someone in Red Squadron is flying around with the call sign “Red 5.” But, this partiuclar Red 5 definitely bites it in a blaze of space battle glory. Rogue One didn’t need to repeatedly tell audiences the call sign of this ill-fated pilot, but they made a pretty big deal of making sure the original Red 5 is definitely dead.

This of course, explains why there’s an extra slot in Red Squadron when Luke shows up at the last minute to help out the Rebels fight the Death Star. Ironically, though Red 5 bites it in Rogue One, and the rest of Red Squadron seems to be okay. But, by the time of the big Death Star battle in A New Hope, only Red 2 (Wedge) and Red 5 (Luke) survive.

Rogue One is out in wide release now.