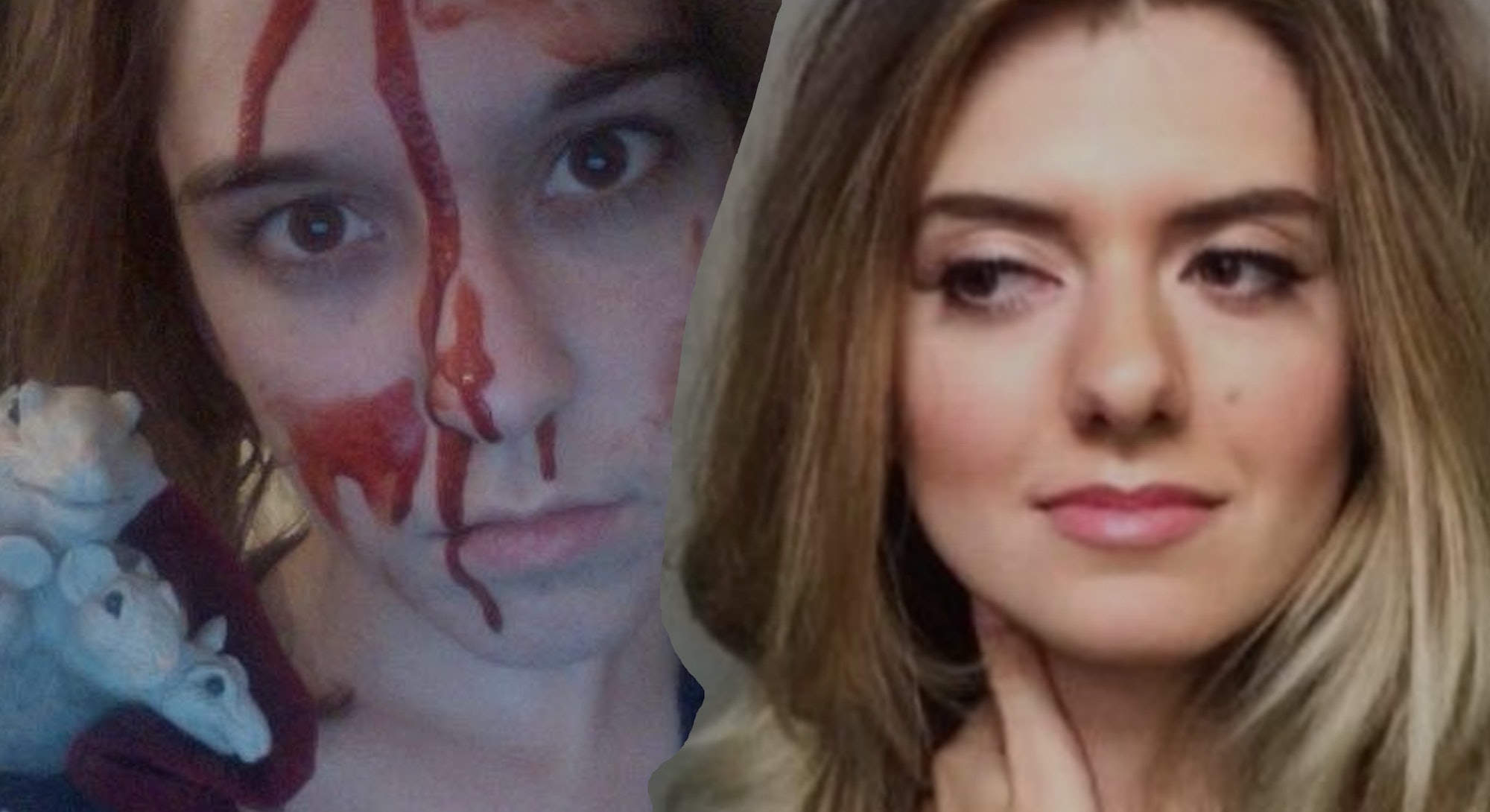 The first thing Madeline Blue tells me when we meet at Cafe Los Feliz is that I have something in my nose, as if this was not an embarrassing enough situation already. I’ve about her for upwards of three years now, and have been reminded of her existence every time the 1999 Law and Order episode “Killerz” airs on TNT.

Allow me to backtrack a little.

I, Jamie Loftus, have never had a certified doppelgänger. There was a time in my life that I would get compared to Anne Hathaway, but then something happened to my bone structure and I got less doe-eyed hot and more someone who looks like this, a pre-teen in a 1999 episode of Law and Order.

Since receiving this screenshot for the first time in 2014, I have been sent it time and time again, with the show always at this exact moment, always with this young actress, and a woman who went on to be in an arc of Orange is the New Black. Clearly the actress who is supposed to look like me, whoever it was, was playing a character who was under fifteen, flat-chested, and troubled.

This is not the reputation I want to have. I want my reputation to be that I am Anne Hathaway and am confident enough to not hedge my pubes, and I have breasts, and have never had a problem before, but think it would be interesting to have one because I, actress Anne Hathaway, could apply this experience to my many acting roles in which I am hot and normal, and most importantly, very hot, and never fifteen, and hot as well.

Anyways, I received this screenshot about ten times, at which point the blood began to seep out of my body. Then it occurred to me - there was someone else in the world, who at some point had to look like me, and how sad for them, and maybe I could comfort them and tell them that eye shadow just looks weird on us and there’s nothing we can do. So I decided to find her.

Unfortunately, every mean-spirited son of a bitch who sent me this screenshot cruelly neglected to write down the episode and year of its release, and with approximately nine thousand episodes of Law and Order and its various offshoots to choose from, my work was cut out for me. I started with the only thing I knew — the Orange is the New Black lady. After an extensive search through the B-characters list on the OITNB wiki, I found actress Annie Golden, who’s played Norma Romano on the series since its first season. Awesome. Great.

Turns out, Annie Golden has been in two episodes of Law and Order. I had gotten this far, so I take a gamble and try the Law and Order: SVU she appeared in ten years ago, “Taboo”. It was not the right episode, but there was a teen murder in it, so it wasn’t a complete waste of time.

That left 1999’s “Killerz,” an episode about child murder, which we can all agree is the only thing more compelling than teen murder. In the first scene, there was the screenshot that had made me admit to myself that I am, in fact, flat-chested and troubled for three years — the Orange is the New Black lady, and the girl, who a quick IMDB search told me was actress Madeline Blue.

One thing you need to know about Madeline Blue is that she is way too fucking cool to be hanging out with me, someone who bears a striking resemblance to her when she was a flat-chested teenager even though she’s a twenty-four-year-old woman furiously burning the candle at both ends. She’s the “Cure Girl” from Wet Hot American Summer (the original movie and the Netflix reboot); she was on The Sopranos, Hello Ladies, and Justified; she’s worked extensively onstage in New York and L.A.; she has a boyfriend I am assuming is hot; and a big apartment. When I was twenty-two, I was on a regional stand-up comedy TV show that is widely considered a tax-dodging hoax and I’m afraid of everyone I’ve ever met in my life. My new bipolar medication gives me this weird tremor. Madeline and I are different people.

Still, I had to try. Fortunately, actresses in Los Angeles are not particularly hard to find and I was able to pull up a Facebook, Twitter account, and official website without too much hassle. Now, to handle this delicately — I could not scare this woman. I tweeted a response to her most recent link.

Already, this new friendship is going very well. Encouraging, but not good enough. To really drive my point home, I change my profile picture on Facebook to the 1999 screenshot of her and send her a long, insecure message about how I am not a freak and am very normal and congratulations to her for being a grown woman and not looking like me anymore, that must feel great.

She is cautiously receptive.

I have caught Madeline Blue feeling insecure. I have given her a taste and then withdrawn, and now she is answering my siren call. We agree to meet at Cafe Los Feliz the next week. At first, I struggle with what I should wear and end up doing what I know best — looking terrible.

Madeline is considerably shorter than me, with a booming voice and loud laugh that betrays her New Jersey roots, even in a closet-sized posh coffee shop with mugs so big that I get stressed out just looking at them. She lets me buy her a coffee and I notice her setting an alarm on her phone just in case I am insane, which is fair. I like her. We look nothing alike now, which honestly is great and I’m happy for her. The first two minutes of the interview are me frantically explaining away what was in my nose that whole time, which was very unnecessary.

Long story short, we were there for an hour and a half and are hanging out on Saturday.

Madeline Blue is from New Jersey and began to act as a child, went to Tufts, lived in New York for two years, and has been in Los Angeles for five years now, proudly paying the same to live in a gorgeous one-bedroom that she used to living in a closet on the fringes of NYC. She’s experienced a lot of success onstage and onscreen in her career (she won’t tell me how old she is after I tell her my college graduation year), and has since branched out into singing, writing, and the So-Cal standbys: rock climbing and hiking. I have to drink three huge cups of coffee to keep up with her energy. When I tell her I first had difficulty adjusting to L.A., she offered her own experience.

Then, because she is cool, Madeline runs into a friend who’s wearing sweatpants, but definitely has made five times the amount of money I will make in my life cumulatively. Because I am a freak and suck, I do not say anything to him and wait for Madeline to get it over with for me — they’re talking about a party they’re both going to on Saturday, whether whose exes will go, and how they feel about it. I try to disappear through sheer will, but my powers are not yet that strong.

“We’re meeting because Jamie stalked me on the internet,” Madeline explains in a way that looks mean on paper, but I swear wasn’t, or at least that’s how I’m going to think of it so I can sleep this week. Her friend is visibly disturbed and feels bad for me, which is fair, honestly.

“What did, what did you like about her?” he asked. It occurs to me that Madeline has neglected to tell him that I am playing the part of a manic pixie dream journalist and not someone who is presenting a clear and present danger to his friend. I try to explain, but also forget to tell him that I’m a journalist, only managing to choke out something about 1999 and that we looked alike.

The friend is suspicious and hurt for Madeline — who is this woman in front of him, and why does she think she is as hot as his friend? “You look…like she did, then?” I say yes, show him the 1999 screenshot, and he seems to understand.

“I guess we kind of look like creepy babies in the same way,” Madeline says, looking between me and the screenshot. Okay. “I look like a creepy little bobblehead doll.”

Her friend is excited to join in and add another salient detail to my suicide note. He says that Madeline looks great now, then looks at me the way you look at a dog before you mercy kill it and says, “You, too.”

Ten minutes into this hang, I have been called ugly three times and this was my idea.

Thankfully, this is the last interloper in my social vision quest, and we press on into the conversation with energy. We talked about family, auditions, and the ingrained east coast attitude of resenting the happiness of other people.

Blue fell into acting after watching her sister, three years her senior and a fellow Tufts grad, and began to pursue it seriously as a child. This would be a source of mild friction between the two as they evolved from a sister-team working together in productions in high-end Jersey theaters into separate adults through college, and later in New York. She attributes the laissez-faire attitude the sisters tried to maintain to the youthful chill that most in their early twenties aspire to, leading to Madeline playing opposite her sister’s husband-to-be for months on end while her sister produced.

“We wanted to be so cool about it,” she laughed. “But it wasn’t very cool. I wish she’d told me, like, Madeline, you’re fine, go do something else.”

Then, there were the Law and Order years to cover, the reason we’d come together in the first place. This particular gig fell square into Blue’s child career and her dogged determination to carve her role in the industry. She explained the role I’d been mistaken for time and time again was originally intended for a heavyset teenager, not a self-proclaimed “creepy baby.” She got the part: gawky, skinny, flat chested and all. And so began one of the most not Anne Hathaway experiences of my lifetime.

Here are some things that you can learn from Madeline Blue:

Dick Wolf will admire your moxie. She got the now famed (because of me, Anne Hathaway lookalike) Law and Order role even after casting directors told her it was intended for a heavier kid. “I can play heavy,” she remembers telling them, “or I can play this skinny, gawky, awkward kid that I am already. Either way.”

Being a child actor does not make you cool. “There would sometimes be kids at neighboring schools who would think it was cool, but it didn’t work so well at my school. There’d be an occasional spike of attention when I was on TV, but mostly I was pretty weird.”

Madeline’s “Jamie is a freak murderer” alarm went on, and she did not leave. About two hours after her arrival, we parted ways with a cautious “maybe see you soon,” and the promise of a maybe-sometime soon Facebook message about attending the party of the guy who called me ugly a few hours earlier. And yes, I would totally go.

Did we get a pic? Of course.

Do we look alike? Not even a little. Have I made my peace with the fact that I am better at making friends when I do so through a series of aggressive emails, profile photo changes, and in-person timidity? That will take a little time.

But hey, I’m choosing to remember this as my artist’s rendering of our meeting.