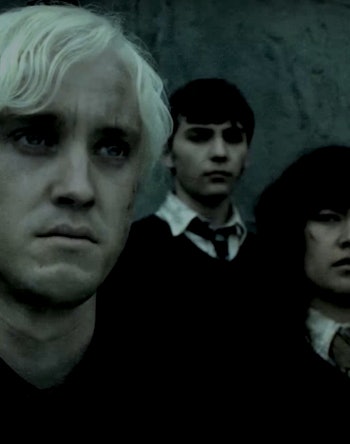 When a group of pure-blood supremacists known as the Death Eaters took over the Ministry of Magic, all eyes turned to Slytherin. After all, the Hogwarts house at the heart of the Harry Potter series, with its reputation for Muggle-loathing and ties to Dark wizards, had birthed the extremist group and its leader, Voldemort. But despite evidence that the house had become an entryway for Death Eaters into the school — and proof that its founder’s radical supremacist ideology was spreading — Hogwarts did its best not to silence its Slytherins.

The shocking post-election rise of hate speech and the increasingly divisive rhetoric used in American media, not to mention the epidemic of fake news, makes it tempting to censor dangerous ideas and opinions. Many of us have already done so by curating our Facebook and Twitter feeds to reflect only what we already agree with. As the outcome of the election showed, doing so has its problems. Living within an echo chamber means that the power of alternative viewpoints is inevitably underestimated and that the people that hold them are recklessly dismissed. Remaining open to the views of Slytherins, despite their often alarming sentiment, allowed the staff of Hogwarts to be aware of the threat the house posed and to stay true to their devotion to plurality in the process.

Hogwarts, after all, was founded in order to provide a safe space for all members of the wizarding community to learn magic regardless of their ideals or backgrounds. Salazar Slytherin, a pure-blood supremacist and founder of the eponymous house, took issue with this doctrine, angrily leaving Hogwarts when the other founders refused to back him. It’s a testament to the school’s commitment to equality that it maintained fairness toward all of its students, even when it became clear that Slytherin’s ideology hadn’t left with him.

When Voldemort returned and his rise to power became imminent, Deputy Headmistress Minerva McGonagall, taking Dumbledore’s position, didn’t have to be fair to Slytherins who were the most likely Death Eater sympathizers. The red flags were clear: Students were already being forced to provide proof of “blood status” in order to weed out Muggle-borns. A compulsory “Muggle Studies” class taught that vicious Muggles “drove wizards into hiding” and that “the natural order is being restored.” Ultimately, it was the Slytherin zealot, Draco Malfoy, who had let the Death Eaters into the school through the Room of Requirement.

There’s no doubt that censoring the Slytherins would have incensed Voldemort’s followers, giving credence to the rift they were deliberately creating between themselves and the rest of the wizarding community. While one might argue that curbing their activities would have diffused the danger the posed altogether, a review of the murderous acts of the once-restrained Gellert Grindelwald illustrates clearly that suppression doesn’t exactly work.

Still, McGonagall could’ve just said “fuck it,” shut up the Slytherins, and handicapped the Death Eaters to temporarily restore stability to the school. But she didn’t, because doing so would not only have meant that Hogwarts advocated behavior that was as unscrupulous as that of the Death Eaters but also have suggested that she was in denial about what was actually happening in the wizarding world. By allowing for transparency, she maintained an environment where all of Hogwarts’s inhabitants were aware of the current political climate — and could make their own decisions about it as they saw fit. It wasn’t an easy choice, seeing as it was pretty clear how Slytherins would align themselves.

Regardless, as part of a school dedicated to maintaining pluralism, it was the faculty’s duty to be fair. This, too, wasn’t easy; to acknowledge opposing ideas without reacting in anger is not the same as accepting those ideas, but in the face of real threats and terror, advocating for it just feels irresponsible. Eventually, even McGonagall’s resolve to remain impartial broke: During the Battle of Hogwarts, she commanded the evacuation of Slytherin house. In the film she insinuated that she wanted them to leave. In the books she gave students old enough the option to stay and fight, with most of Slytherin fleeing or fighting alongside Voldemort. You can’t blame her: When hateful rhetoric becomes a part of everyday speech, reneging on the principles of free speech and tolerance seems more like a necessity than a choice.

Hogwarts’s role was to protect the rights of the people within it, and its triumph was that it succeeded in doing so, even when many of those people turned out to be dangerous. Its greatest achievement was that its free speech policy allowed a distinction to be drawn between Slytherins, who were simply people of a certain personality, and Death Eaters, who were a subset of those people with pointedly harmful intent. It’s worth recalling that Slytherin had given rise to good wizards, like Tonks’s mother Andromeda Black, and that even the darkest witches could act morally, as Narcissa Malfoy, a notoriously nasty Slytherin, did when she lied to Voldemort to protect Harry Potter (of course, after he told her that her son was still alive). By not silencing its Slytherins, Hogwarts openly acknowledged that the house was not inherently evil.

As readers revisiting the Second Wizarding War in light of the spread of radical supremacist political powers, the school’s commitment to plurality is especially admirable. Was it the right choice? It’s hard to say: It resulted in many deaths and the school’s surrender to Voldemort’s control, and it risked the spread of a terrifying and toxic ideology. But it did create an environment in which the sentiments on either side of the debate were out in the open, which is arguably better than a situation where sides are deaf to the other.

If we have faith in our political system, then upholding free speech and believing in the value of rational discussion is, whether we like it or not, the best we can do. Rebel groups like the Order of the Phoenix or Dumbledore’s Army are important because they fearlessly protest and give voice to those who are too afraid to speak out, but they shouldn’t be counted on to mobilize and save society from dangerous, extremist political control if peace and rational discussion are what we value. As the Hogwarts staff discovered in the wake of the Death Eaters’ ascent, the bitter feeling that ensues — a mixture of frustration and helplessness — can’t be mitigated, even by magic, but it’s the price we pay to uphold what’s right.