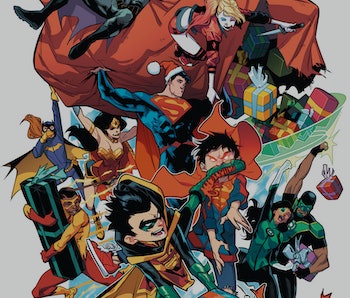 DC just released its long Holiday Special comic, narrated by Harley Quinn, and the book is, surprisingly, one of the best comics the publisher has released all year. DC capitalizes on its own push for diversity within its ranks, allowing Chinese Superman to explain Dongzhi, and Batwoman’s Hanukkah vigilantism feels earned, rather than forced.

Overall, Harley’s interconnected stories are funny, quick, and uncomplicated, and the special cinches a wildly successful year for the publisher. We’ve compiled the craziest moments in the comic, since it’s a non-stop sleigh ride. Spoilers ahead!

Batman is a shady queen

Batman realizes while already standing at the Justice League’s party, that he completely forgot to get his fellow superheroes presents. Using his iPhone, he texts everyone (including Harley) that a gift has been made in their name to Bruce Wayne’s charity organization. Wonder Woman and co are visibly annoyed, and Batman responds with…a Kermit meme.

Krypto opens his own gifts

Worried that Krypto might feel alone among earthling dog, Superman and his son venture to the Fortress of Solitude to dig up a cool present for him. After reminiscing together, the Super family decides to give Krypto his own special collar, made from Superman’s old costume belt. At first, the dog seems confused, but then he’s psyched. It’s adorable.

Harley tries to get two of the transplants in the Justice League to describe the holiday traditions they remember from their childhoods. Wonder Woman says she didn’t celebrate Christmas on Themyscira, and then she starts to describe a comically savage ritual involving human hunting…

You really need to do a lot to freak Harley out, but Wonder Woman succeeds.

Even Superman can only add that his folks just put up a tree for Christmas and call it a day.

Flash and the Rogues have a Christmas truce every year

Who knew Flash and Rogues refused to fight each other during the Christmas season? When an in-progress bank robbery by Snart and the Rogues knocks a mail truck over, Flash and Snart see the gifts scattered everywhere and decide some things are more important than their squabbles.

Nightwing and Batgirl have the cutest possible New Year’s Eve

One of the shorter glimpses into holiday-season vigilantism follows Batgirl and Nightwing as they separately try to rush through their vigilantism, fighting bad guys so they can meet each other for their New Year’s date on time. They climb to the top of a bridge, unknowingly at the same time, and end up having a lovely little superhero moment.