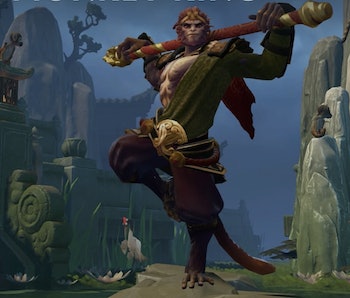 The core structure of Dota 2 hasn’t really changed since 2005, when it was still just a popular mod of Warcraft 3’s custom game engine, known then as DotA Allstars. In the game’s 7.00 update, that core structure is still there, but the game is finally casting off the elements of its real-time strategy mod roots and becoming something flexible, inventive, and new.

The 7.00 update added a massive amount of content — the update is well over 6 gigabytes — to the game, including a new hero, Monkey King; a complete, drastic map redesign; a new skill-tree format for scaling heroes into the later stages of the game; and the new “shrine” buildings. Many of the gameplay updates are confusing and chaotic; playing my first few matches of 7.00 was almost as disorienting as my switch in 2012 from Heroes of Newerth, a standalone offshoot of the original mod, to Dota 2. Learning the intricacies of the new map is a frustrating, but it’s a refreshing challenge in a game that hasn’t changed much in a decade — after all, Dota has always thrived in chaos.

That’s not to say everything in the update is good. Valve software has largely been a careful steward of Guinsoo and Icefrog’s custom game, which sparked the explosion of multiplayer online battle arena (MOBA) games, but new patches always come with hiccups. The 7.00 update also completely redesigned the game’s user interface and heads-up display. It’s, to put it lightly, currently a gigantic fucking mess.

The minimap display is problematically small, although it can be adjusted, and the change in its color scheme makes following the action and position of allied and enemy heroes much more difficult, which is a major problem on an unfamiliar map. Gold, statistics, and even item icons are much too small and often hidden in counterintuitive places — the HUD display takes minimalism too far and ends up more distracting than before. It’s even been causing headaches and dizziness in some players, myself included — this is probably an adjustment issue, but it’s still a concern.

There are also countless bugs, but that’s to be expected with an update of this size. And the UI change is necessary — Valve’s prior system was based on closed-source software it desperately needed to cut ties with to be able to make changes. Plus, people always freak out over UI changes, like the last major tweak years ago:

The new map is interesting. It’s far more dynamic than the original layout — there are many more slopes and stairs, which changes how vision works. Ward spots feel slightly less intuitive, and it seems like there’s less vision of the map overall with a standard two- or three-ward setup. Jungling and pulling are different — creeps spawn every two minutes, rather than one, and the pull slots are different. But the addition of shrines (mini-fountains that grant regeneration every five minutes) in the jungles and the two bounty-rune spawns makes the game much more dynamic for supports and roaming utility heroes.

Yeah, it’s actually kind of fun to play support in 7.00, which might be Dota 2’s greatest triumph yet. Overall, the game feels much more fluid, which will probably mean the metagame shifts from static farming and big late-game engagements to a much more chaotic and shifting pattern of battle, with carries forced to participate in teamfights earlier than they might have in the late 6.xx meta.

The biggest change other than the map design also makes supports great again. Passive stat leveling is gone, replaced with a new passive ability tree that gives each character unique bonuses at level 10, 15, 20, and 25. On a surface level, a bunch of squishy supports get health, damage, passive gold per minute or other stat bonuses at different intervals that can save players from early game or midgame ruts. But the big change here is that the introduction of a passive skill tree adds a gigantic new set of variables that Valve can tweak to balance the game. Over the next few months, the metagame and relative power of various heroes will probably see-saw wildly, as Valve irons out kinks and imbalances in the passive skill tree, but over time, the skill tree should allow a much greater degree of fine-tuned balances. This could help resurrect niche heroes that have fallen out of favor entirely, or make certain otherwise inefficient heroes extremely viable in certain matchups. Either way, it’s an exciting mechanic to play with, and only deepens the complexity of the game.

The most popular of Dota-clones, League of Legends, simplified Dota’s punishing learning curve and gameplay while preserving the majority of its depth. But Dota 2 has always been defined by its complexity and sheer “wait, what?” factor, and the 7.00 update does nothing to defang that. The UI update is a clusterfuck, and the gameplay changes will be a roller coaster for the next few months, but as players settle into the new era, Dota 2 is in a good place to keep going for another ten years.

More like this
Gaming
Jan. 22, 2023
OGL 1.2 update: The battle for D&D's future has only just begun
By Corey Plante
Gaming
Jan. 24, 2023
How to use the weapon triangle and 5 more combat tactics in Fire Emblem Engage
By Robin Bea
Gaming
6 hours ago
Fire Emblem Awakening Is the Most Important 3DS Game Ever
By Hayes Madsen
LEARN SOMETHING NEW EVERY DAY.
Related Tags
Share: