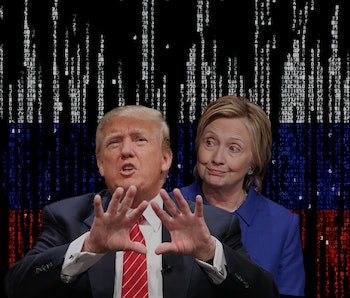 There’s almost no chance that enough faithless electors in the Electoral College would break ranks with their states to award Hillary Clinton the presidency instead of Donald Trump, but a group of them is requesting the one thing that might seriously change some minds: Intelligence briefings on the CIA’s finding that Russian hacking helped Trump get elected.

A group of 10 Electoral College members — nine Democrats and one Republican — is demanding an intelligence briefing with all the facts about Russia’s alleged state-sponsored hacking and the effects it had on the 2016 election before the body votes on December 19. (Congress counts the votes on January 6.)

The electors’ numbers include Christine Pelosi, the daughter of Nancy Pelosi and a former member of congress, and Texas Republican Chris Suprun. The pair, along with eight colleagues, laid out their requests in an open letter to National Intelligence Director James R. Clapper, which reads in part:

The Electors require to know from the intelligence community whether there are ongoing investigations into ties between Donald Trump, his campaign or associates, and Russian government interference in the election, the scope of those investigations, how far those investigations may have reached, and who was involved in those investigations. We further require a briefing on all investigative findings, as these matters directly impact the core factors in our deliberations of whether Mr. Trump is fit to serve as President of the United States.

“We do not understand our sole function to be to convene in mid-December, several weeks after Election Day, and summarily cast our votes,” the letter reads, explaining that access to intelligence briefings is vital to their charge of making an informed selection. It also quotes Alexander Hamilton’s vision for the Electoral College as laid out in Federalist No. 68, which stated that one reason for its existence was to prevent a “desire in foreign powers to gain an improper ascendant in our councils.”

The letter does a pretty admirable job laying out all the evidence of sketchy Russian involvement, especially in light of the United States Intelligence Community’s announcement over the weekend. Among the revelations are allegations that Russian operatives were able to hack the Republican National Committee in addition to their infamous hack of the Democratic National Committee, but they didn’t spill the beans on the RNC so as to give Trump a boost.

Senate Majority Leader Mitch McConnell and House Speaker Paul Ryan have both called for a bipartisan investigation of the allegations. Trump, meanwhile, has fired off several tweets saying that it’s all hooey, as is his wont.

“Trump’s willingness to disregard conclusions made by the intelligence community and his continuing defense of Russia and Russian President Vladimir Putin demand close scrutiny and deliberation from the Electoral College,” the letter reads.

More like this
Culture
Feb. 4, 2023
The End of the Cold War Could Have Killed James Bond. Instead, it Made Him Stronger.
By David Grossman
Science
Feb. 1, 2023
7 Years Ago the World Agreed to Slow Down Climate Change — But a New Report Shows an Uneven Future
By Tara Yarlagadda
Culture
22 hours ago
Zombies Used to do More Than Eat Brains, and Wes Craven Showed Us How Scary Their Masters Could Be
By Josh Bell
LEARN SOMETHING NEW EVERY DAY.
Related Tags
Share: