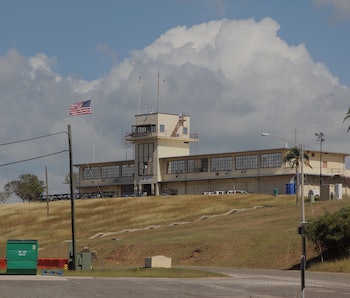 In January 2013, the war court at Guantanamo Bay was going along as normally as is possible for a place like this, when someone cut the televised feed for the media and those in a viewing gallery. Inside the courtroom, a red hockey light — 🚨 — near the judges’ bench went off like someone just scored a goal. When the signal came back, the court, which was in the middle of a pre-trial motion in the 9/11 case, was in pandemonium. The guilty party turned out to be the CIA, and the military judge, who apparently didn’t know the agency had such a capability, ordered the secret kill switch disabled.

During a recent hearing in the 9/11 case here, reporters were given a tour of what the military calls the “Expeditionary Legal Complex,” a set of buildings and trailers that host the legal proceedings at Gitmo known as military commissions. The complex was finished in 2008 for $12 million, says to Lt. Col. Valerie Henderson, a Pentagon spokesperson. The courtroom itself cost $4 million, and is an impressive feat of information control. Reporters were only allowed to take photographs in three locations in the complex and were barred from shooting in the courtroom for what the military calls “operational security” reasons. OpSec rules often seem arbitrary; CBS News, for instance, was allowed to film in the courtroom in 2013, while reporters on this trip were not. One official suggested that some things the media can photograph now could be barred in the future.

The televised feed is on a 40-second delay to prevent the disclosure of classified information, and has been cut a handful of times since the 9/11 trial began here in 2008. Live television historically has a seven-second delay, which makes the Guantanamo trials a little more than five-and-a-half times as quasi-live as the Super Bowl.

Even with the delay in place, the court often meets in secret sessions out of an abundance of caution — generally at the request of the government. The 9/11 trial was initially stopped by the White House, only to be restarted anew in 2012. There are currently two other terrorism cases in active proceedings here. Next month, the prison at Guantanamo Bay will celebrate its 15th anniversary. There are 59 prisoners here, 20 who have been cleared for release.

Earlier this month, President Barack Obama, in a speech at MacDill Air Force Base in Tampa, Florida, again called for the closure of Guantanamo:

And, in fact, our success in dealing with terrorists through our justice system reinforces why it is past time to shut down the detention facility at Guantanamo. This is not just my opinion, it’s the opinion of many military leaders. During my administration, we have responsibly transferred over 175 detainees to foreign governments, with safeguards to reduce the risk of them returning to the battlefield. And we’ve cut the population in Gitmo from 242 to 59. The politics of fear has led Congress to prevent any detainees from being transferred to prisons in the United States — even though, as we speak, we imprison dangerous terrorists in our prisons, and we have even more dangerous criminals in all of our prisons across the country; even though our allies oftentimes will not turn over a terrorist if they think that terrorist could end up in Gitmo; even though groups like ISIL use Gitmo in their propaganda. So we’re wasting hundreds of millions of dollars to keep fewer than 60 people in a detention facility in Cuba. That’s not strength. Until Congress changes course, it will be judged harshly by history, and I will continue to do all that I can to remove this blot on our national honor.

That CIA episode on January 13 was just one of countless bizarre events that have taken place in the state-of-the-art war court here, but it serves as a helpful reminder that when it comes to Guantanamo Bay, things are rarely what they seem. Defense attorney Cheryl Bormann, for example, discovered that a smoke detector in a client meeting room was wired to record sound. Inside the courtroom, the microphones on the desks used by attorneys are push-to-talk — as opposed to push-to-mute, which they were originally — but a sign on the door to the courtroom reads, “Assume microphones are live at all times.” As a result, defense attorneys go to extreme lengths to protect their privacy at Gitmo.

In February 2013, when the mics were push-to-mute, a court technician testified that intelligence agencies had access to an “ungated” feed that included everything picked up by the microphones. That meant even whispers that were too quiet for the mics to broadcast were pumped to intelligence monitors, giving them access to virtually everything said in the room, according to the defense. When asked if that is still the case, Henderson directed Inverse to a statement made by the prosecution following the February revelation, which stated ���that no entity of the United States Government is listening to, monitoring, or recording communications between the five accused and their counsel at any location.”

A subsequent judicial ruling that found “the Defense has not shown their attorney-client communications in the ELC Courtroom are being purposely intruded upon; or, in fact, whether any such intrusion has occurred at all,” but also stated, “there is no specific prohibition against an individual, with the appropriate need to know, from monitoring the Commission proceedings, either through physical presence in the courtroom or electronically, in the manner being challenged by the Defense.” The seeming contradiction between the sign and the push-to-talk is one of many factors that exacerbate the fear of surveillance here.

The jury-box wall has six visible cameras for broadcasting, and there are at least two more, one on the front wall and one on the back. There is also a powerful security camera on the wall above the court security officer’s desk. One day in court, defense attorney James Connell found out just how powerful that camera was. “In order to bring our laptops into the courtroom, we need to get a property pass. And in order to get a property pass, you have to take it to IT to disable your wifi capabilities,” he tells Inverse. “Somebody came to me and said your property pass is expired. And I said, how do you know? And they said, we looked at it with the security camera. Which means they’re zooming down to very small text.”

“I said: ‘well, I’ll get another property pass, but we gotta talk about this’,” Connell says. “So, what actually happened was we entered an agreement with the security people not to zoom in small enough to read writing.”

The attached viewing gallery is separated from the rest of the court by triple-pane, sound-proof glass. The journalists, NGOs, and victim family members who are allowed to observe the proceedings can see the feed on a set of monitors hung from the ceiling, so the sound and video doesn’t synchronize with what’s happening silently in real-time.

Beyond the courtroom, the ELC has a handful of trailers to serve various purposes. One is for legal teams to meet with witnesses, should the case continue to progress and get to the trial phase. Another is for jury deliberations. Yet another houses a “quick reaction force” that can storm the courtroom if needed. The ELC has five smaller, prison-cell structures to hold the co-defendants before court and during breaks throughout the day. Those cells are outfitted with a TV to watch the proceedings, an arrow that points to Mecca, and a divider to section off the cell when they meet with an attorney.

The ELC could theoretically be moved to the United States if President-Elect Trump ordered it, though that seems unlikely. For now, as long as everything is running smoothly, the proceedings feel a little like a hi-tech version of CourtTV. “Office of Military Commissions courtrooms have state-of-the-art technology, which allows evidence to be presented and retained electronically while preserving public access to military commission proceedings and protecting national security,” says Henderson. “Equipment in the OMC courtrooms is similar to, but more advanced than, that in most U.S. federal courtrooms.”