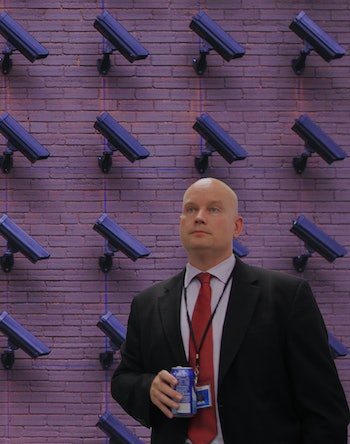 When defense attorney James Connell meets with his client, Amar al-Baluchi, one of the five defendants in the 9/11 case currently in the pre-trial phase at Guantanamo Bay, Cuba, sometimes their conversation has a momentary gap in it. They meet in an area of the prison complex called Echo 2, and, years ago, another 9/11 defense attorney discovered that a smoke detector in the room was surreptitiously wired to have the capability to record sound. An investigation found that the prosecution was never given recordings of attorney-client meetings from the hidden device, but Connell and the rest of the defense teams are still rightfully wary.

The gaps in the conversation? That’s when Connell or al-Baluchi is pausing to write something on a dry erase board. “We don’t trust the lack of audio monitoring,” Connell tells Inverse. “For example, if you want to establish the subject of a sentence, you’ll say: ‘when I say he, I mean this person.’ The idea is to drop out key pieces of information out of the flow.”

The 9/11 case is at least a year away from going to trial, maybe more. In the years since the five co-defendants were arraigned in 2012, there have been hundreds of pre-trial motions filed. The complication facing the prosecution, defense, and military judge, is that the trial isn’t happening in either typical federal court or a typical military court martial. Instead, the case is more like a military tribunal, officially called a military commission.

Congress created the current iteration of military commissions in a 2006 law, later updated in 2009, that took elements of standard civilian court and combined it with elements of standard courts martial. The result, according to critics, is a new and untested system that has to be created on the fly. Hence, the delay, and all the paperwork — paperwork that defense attorneys are mandated by law to protect to the best of their abilities.

Connell is a self-described infosec (“information security”) nerd, and, as a defense attorney practicing at Guantanamo Bay, he has a host of capable adversaries who would theoretically love to see some of his information. During a recent hearing in the 9/11 case, Connell sat down with Inverse to describe his attempts to protect his communications with his client, as well as with attorneys representing other defendants in the case.

He approaches this part of his job with a willingness to use whatever tool fits the need at the time, and, since the defense has a minimal budget dedicated to information security, many of the products they use are open source and available for free, or cheap. “I use a commercial VPN for my phone and my computer. I use Veracrypt, for full-disk encryption,” Connell says. “I use Signal and Wickr. Signal for voice communication and Wickr for text and voice communication.” Wickr’s signature feature is that text messages automatically self-destruct, whereas with Signal the user has to change the settings to enable that feature.

And as anyone who uses PGP encrypted email knows, it can be a pain to set up, and not everybody is willing to go through the hassle of using it. The most famous example of that dynamic was former NSA-contractor Edward Snowden trying, and initially failing, to get the journalist Glenn Greenwald to install PGP-protected email. But there are times when Connell has to send a secure email, so he found a workaround. “I use Virtru, which is asymmetrical, in that the other person doesn’t have to participate in public key architecture in order to send encrypted email,” he says.

There is, of course, a technical angle to protecting information, but infosec at Guantanamo isn’t just a set of best IT practices — though it is partially that. Sometimes safeguarding information also seems like a set of quasi-spiritual rituals designed to fend off the demons for as long as possible, even if 100 percent success isn’t possible. Beyond the dry erase board, attorneys at various points have met with reporters in remote locations on the island for fear of government eavesdropping. “In all of our physical spaces at work, nothing goes in the trash, they all go into burn bags which are disposed of each week,” says Connell. Defense teams were forced to file this handwritten motion after it came to light that the government had inadvertently gained access to their emails.

That intrusion was discovered in April 2013, and, following lengthy litigation, the defense teams were enclaved off from the rest of the Department of Defense. “That was interesting because the threat model driving all that was really the rest of the Pentagon — to make us isolated within the Pentagon – while at the same time maintaining our information security against other adversaries, whether those be hackers or foreign intelligence or whatever,” Connell says.

Connell and his co-counsel, Air Force Lt. Col. Sterling Thomas, both told Inverse that the phones in their DoD offices in Washington, DC, and at Guantanamo Bay, have stickers on them that read, “This telephone is subject to monitoring at all times. Use of this telephone constitutes consent to monitoring.” The same stickers are on phones used by journalists covering the legal proceedings at Gitmo:

For security reasons, Connell and Thomas aren’t allowed to bring their cell phones into their offices. The military judge has ruled that no improper monitoring has taken place within the courtroom, but he hasn’t ruled on the issue of what has happened in the outside world. “The question of what’s going on the larger society, and how that affects the attorney’s client, and attorney to attorney communications is still pending before the court,” says Connell.

The underlying issue, as is always the case at Guantanamo, is that there’s always a new surprise coming down the road. The defense team for Ramzi bin al-Shibh, for example, was investigated by the FBI, essentially stopping the trial until a separate “special review team” concluded its own investigation of the FBI’s infiltration. As that episode was playing out, bin al-Shibh recognized one of the defense translators; he had previously worked at a CIA black site where bin al-Shibh had been detained and tortured.

Those issues, as well as things like the hidden smoke detector, create a sense among the defense teams that there is a limit to their knowledge of what’s really happening at Guantanamo.

“What do I know?” Connell chuckles. “I don’t know anything.”