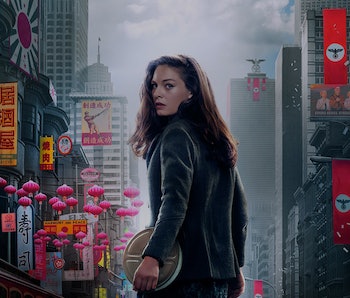 The second season of Amazon’s alternate history series The Man in the High Castle hits the streaming platform on December 16. A show about a group struggling to live in an alternate post-World War II America ruled by the Axis powers, it’s one of the more wild Philip K. Dick adaptations out there. By their nature, Dick adaptations have taken some heavy license with the source material, often simplifying the work of a man whose raison d’etre was creating ridiculously ambitious new worlds on the page. But what separates The Man in the High Castle from other formidable adaptations like Blade Runner, Total Recall, Minority Report, and more is that it almost needs to different from the book.

The differences between the book and the show are many. As with the novel, three major plots drove the first season of the show: A Nazi defector spy named Mr. Baynes (real name: Rudolph Wegener) meets with high-ranking Japanese official Nobusuke Tagomi; a secretly Jewish factory worker named Frank Frink creates fake pre-war antiques and jewelry for pawn, while he increasingly turns against the Japanese-ruled Pacific States; and Juliana Crain and Joe Blake (Cinnadella in the novel, and still a Nazi double agent in both) wander the neutral territory in the middle of the country to a place called Canon City. There, they try to get involved in a resistance movement after being exposed to a subversive work called The Grasshopper Lies Heavy.

With its built-in romance and freedom fighter intrigue, the latter storyline with Juliana is the main focus of the TV series, and although the huge scope of the novel is mostly streamlined and condensed in the show, there are still even bigger differences. For instance, British actor Rufus Sewell’s evil Obergruppenführer John Smith was not a character from the book, which is a wise addition because it clearly delineates a much-needed main villain for the show. Nazis are inherently bad guys, but it’s great to have a specific bad guy to represent the larger reprehensible state of affairs.

But perhaps the biggest change between the book and series is that the mysterious anti-fascist novel The Grasshopper Lies Heavy — which supposedly shows a history where the Allies won the war and ties the resistance together, and was written by the titular Man in the High Castle of Dick’s book — is a newsreel in the show. It is a change that makes total sense for the adaptation.

The show’s creator, Frank Spotnitz, said as much at the 2015 San Diego Comic-Con, telling the crowd at the show’s Season 1 panel, “That was actually the first thing that popped in my mind when adapting it for television, which was that instead of a book, it should be a film,” he said, “because it’s a visual medium.”

Just like the alternate histories of The Grasshopper Lies Heavy and Dick’s actual work, the show is only strengthened by these story differences because it exists in a different medium. Not only can it be told over a longer period of time — it’s already moving into multiple seasons — but it can visually distinguish itself beyond the novel’s thematic strengths and descriptions. In an increasingly rocky political climate in the real America, the show also has the opportunity to become particularly topical, if future seasons choose to highlight the unfortunate parallels even more. But specifically, Spotnitz also told Entertainment Weekly around the time the first season premiered, “We depart from the novel, but we only did it to try to be more faithful to the ideas, to try and find ways to dramatize them more clearly.”

The show succeeds on that on many counts and in particular does an outstanding job of capturing the vivid familiar-but-different setting and tense tone of the source material. But it also opens itself up to going off on its own. It’s this kind of adherence to what came before it, but willingness to stand alone at times, that has benefitted other similar TV adaptations like Fargo, The Exorcist, The Leftovers, and 12 Monkeys into unique properties based on beloved source material.

In his own interview with EW, executive producer Ridley Scott said, “It’s a hell of a book to break down,” in regards to Dick’s original novel. Amazon’s The Man in the High Castle succeeds precisely because it breaks the book down into exactly what’s needed. It may be based on a beloved book, but it works best when you forget about that.