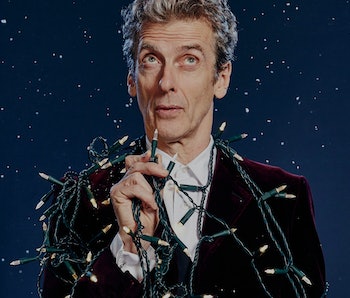 It’s a good thing the Doctor has a superhero on his side this Christmas. The first official trailer for the 2016 Doctor Who Christmas Special has the Doctor, the Ghost, Lucy, and Nardole taking on brain-swapping aliens and their Earth-orbiting ship.

This year’s special will take on several plots at once. First is the (somewhat) continuation of last year’s special with the Doctor and Matt Lucas’s Nardole teaming up and landing in New York City for the holiday season. Little is known about these brain-swapping aliens that have been promised, but they’re certainly creepy. They’re pale and veiny, and their faces are half-hidden behind surgical masks.

And then there’s the Ghost plotline. It looks like the Doctor maybe had something to do with the Ghost’s creation, but the official plot synopsis promises a big unveiling for the Ghost’s true identity. Oh, and the Ghost and investigative reporter Lucy might have a little somethin’ going on a la Superman and Lois Lane. There’s a lot happening in this episode.

Discover all the answers when “The Return of Doctor Mysterio” airs on December 25.