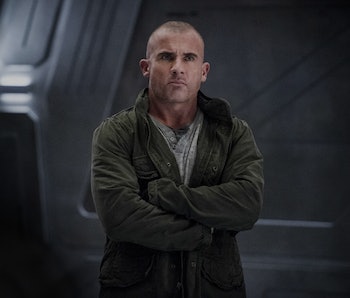 The heroes on Legends of Tomorrow might’ve been able to best a bunch of aliens during last week’s crossover, but the team definitely lost to the bad guys on Thursday’s mid season finale — but another way of looking at it is that it was a victory for family.

The Legends jetted back to the 1920s to halt an aberration involving Al Capone. They’re eventually able to recover the documents that will eventually get the infamous mob boss nailed for tax evasion, but the real villains of the season — Damien Darhk, Reverse Flash, and Malcolm Merlyn — get everything they need. In order to secure Stein’s rescue, the team gives up the precious amulet they’ve been safeguarding from the evil speedster.

Turns out that amulet is some sort of magical compass that will lead them to the Spear of Destiny, the fabled relic which supposedly pierced Jesus’ side as he hung on the cross. In the comics, the Spear of Destiny has popped up a few times but it was most famously used by Adolf Hitler to keep American superheroes from ending World War II. The villains in Legends say it can rewrite reality which is, uh, a bad sign.

Stein is understandably a little conflicted that the heroes went against their primary mission, protecting time, in order to save his life. But Stein himself is already working against the timeline because he wants to protect the daughter he learned about during the crossover even though she’s an aberration. It’s family time for the Legends — actual time can fend for itself.

The villains won in less obvious ways during the hour too — or at least they made progress. Rory is being haunted by a vision of his dead partner Snart, a.k.a. Captain Cold. Snart wants Rory to be a full-fledged villain again. Rory was able to stay on the side of the angels (at least as much as he ever really has, that is), but Amaya stole a bottle of booze, and Snart is still tormenting Rory.

The episode closes with a shot of Rip Hunter, who we haven’t seen since he died in the season premiere. Except, for completely inexplicable reasons, Rip is in 1967 directing a movie about his own life and speaking with an American accent.

Legends of Tomorrow comes back on Jan 24 of next year. Hopefully things will make sense then.