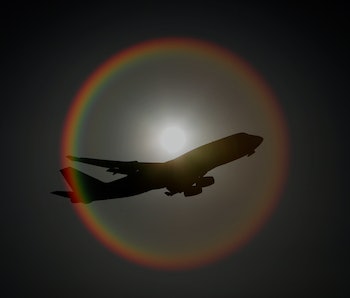 Sitting next to a crying baby while your knees are smashed because the person in front of you is reclining their seat already makes for a miserable flying experience, but it could always be worse. You could be stuck listening to some jabroni make a lengthy phone call for the entire flight. Thankfully, the Department of Transportation is looking out for you. The DOT wants airlines to have to warn customers if phone calls are an option on each flight.

On Thursday, the DOT announced its proposal that would require airline ticket sellers to “disclose in advance to consumers if the carrier operating their flight allows passengers to make voice calls using mobile wireless devices.”

Under the proposal, airlines would have to give customers a heads up if they allow voice calls during the flight. Otherwise, the DOT worries, passengers might board a flight and realize that they’re stuck next to some dingbat making a lengthy, unpleasant call with his mother.

Flights that don’t allow voice calls wouldn’t have to disclose anything, naturally.

“Allowing voice calls, without providing adequate notice, would be an unfair and deceptive practice,” a release from the DOT reads.

The department is open to public input on the proposal at their website, regulations.gov. Visitors can weigh in on this specific proposal by looking up docket number DOT-OST-2014-0002. It’s probably worth dropping them a line, because the department says its open to the idea of just straight-up banning all voice calls on U.S. flights rather than simply requiring disclosure on the airlines’ part.