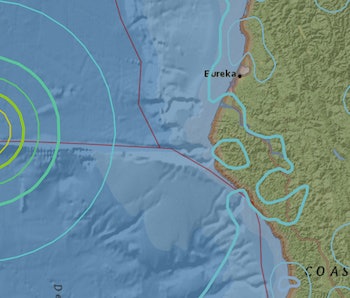 On Thursday morning a 6.5 earthquake shook the West Coast from Carmel to central Oregon. The quake’s epicenter was about 100 miles off the coast of Ferndale, a city in Humboldt County, California, and it hit on the Mendocino fault — one of the most seismically active regions of the San Andreas fault zone. This area is where the North America plate and the Pacific plate meet.

Being so close to Humboldt, this area is also a part of what’s called the Emerald Triangle — a tri-county region that leads the United States in high-grade marijuana production. The fact that a earthquake rattled an area with a high-density of marijuana consumers doesn’t come without effect: Some studies indicate that disaster and trauma leads to an increase in marijuana use. The first reaction many smokers may have had today was to toke up some more.

Take this study of people who experienced the 2010 earthquake in L’Aquila, Italy. Within a group of 764 subjects, alcohol use increased by 49 percent, tobacco use by 38 percent, and cannabis use by 18 percent. Another 2010 study found that among a sample of Hurricane Katrina evacuees, marijuana consumption increased by 34 percent. It’s not just natural disaster that leads to larger consumption: A 2004 evaluation of 2,729 adults who had lived in Manhattan during the 9/11 attacks found that there was a 2.7 percent increase in using marijuana.

How beneficial it is to use marijuana to deal with trauma is another question. There’s a substantial disconnect between the number of people who say that the use marijuana to help with anxiety and the number of studies that have found that marijuana actually decreases anxiety. While research does indicate that there are cannabinoid receptors located in the part of the brain involved in regulating anxiety, both Harvard Medical School and the National Center for PTSD say there’s not enough evidence that marijuana is an effective treatment.

There is a chance that smoking to deal with anxiety could both help and hurt. A paper released in March found that pot may help you deal with negative external stimuli in the short term, but eventually makes it harder to deal in the long run.

A more effective route for California residents to deal with earthquakes is to immediately follow that quick hit with a call to their local political representative. A report released in June found that the state is woefully unprepared for “the big one”: An aging infrastructure, poorly designed water supplies, and half hazard natural gas line placement could eventually mean catastrophe.

More like this
Science
Sep. 11, 2022
Astronomers find a shocking culprit that shaped Earth's continents
By Charles Q. Choi
Science
Sep. 10, 2022
Fall Equinox 2022: Date, time, and opportunities for astronomy during this yearly event
By Brooke Edwards
Science
Sep. 23, 2022
We finally know how many ants are crawling the Earth right now
By Jennifer Walter
Share: