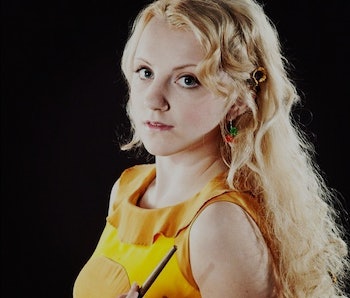 Evanna Lynch, who played Luna Lovegood in the Harry Potter films, recently revealed that she subscribes to the fan theory that J.K. Rowling is secretly a Muggle.

According to The Leaky Cauldron, Lynch said, “Every now and then I’ll just be like, ‘Is this all an elaborate cover up and the wizards are howling with laughter at how we’ve accepted this? Is J.K. Rowling the only Muggle in the world who knows about the secrets and she’s somehow been entrusted? What if she’s covering it up?”

The theory that the wizarding world is real and J.K. Rowling is somehow involved might sound like it belongs in The Quibbler, but it’s bounced around the Potterverse internet for as long as its existed. Some maintain that Rowling is a Squib — a non-magical person unlucky enough to be born to a Magical family. Recall that his status as a Squib is why Hogwarts caretaker Argus Filch was always so bitter. The theory states that Rowling wrote down the “history” of the wizarding world and cleverly disguised it as fiction to Muggles.

Another popular variances on it is the supposition that Rowling is secretly journalist Rita Skeeter, who has deviously spilled the details of the wizarding world to Muggles for profit.

Lynch did not comment about whether she believes in Crumple-Horned Snorkacks.

More like this
Entertainment
Jan. 30, 2023
The Last of Us Episode 3 Features One Subtle Video Game Easter Egg
By Alex Welch
Entertainment
Feb. 2, 2023
DC Is Finally Putting Robin in a Batman Movie. It's About Time.
By Eric Francisco
Entertainment
21 hours ago
Superman: Legacy Teaser Hints at a Radical Direction for the Man of Steel
By Eric Francisco
LEARN SOMETHING NEW EVERY DAY.
Share: