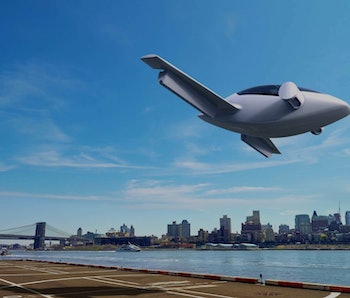 Sitting in traffic is a torturous experience, but an alternative may soon let you fly above it all in an air taxi. German company Lilium Aviation announced a 10 million euro ($10.7 million) Series A funding round from venture capital firm Atomico on Monday, which will be used to work on its latest prototype for a vertical takeoff and landing (VTOL) aircraft that will start test flights in early 2017.

The Lilium Jet — which is a jet in name only — will run entirely on electric power and use 36 fans to propel two people as far as 190 miles. Lilium predicts the plane will help people get from the countryside into the city and bypass traffic jams, all for a price that’s comparable to current ride-sharing services, in a fraction of the time.

Lilium Aviation isn’t the only company developing VTOL air taxis. Airbus announced its Vahana project, an autonomous VTOL plane, back in October, and Uber made a splash recently when it released its white paper on VTOL transportation.

Lilium expects their little aircraft to have a big impact on city living. They predict the Lilium Jet will be used by air taxi services, perhaps including Uber, and even a shift in housing prices.

There are a lot of details to be worked out before VTOL air taxis become a regular sight in city skies. Landing pads, noise regulations, licensing, and air traffic control will all have to be decided on in the coming years. It’s hard to know if air taxis will be a reality within the next decade like Uber is predicting, but $10.7 million should help Lilium Aviation a bit closer to meeting that goal.

More like this
Innovation
Jan. 25, 2023
Starship orbital flight: SpaceX successfully loaded the rocket with over 10 million pounds of propellant
By Mike Brown and Molly Glick
Science
Feb. 2, 2023
Look: An Iceberg Twice the Size of NYC Just Broke Off Antarctica
By Jennifer Walter
Science
Jan. 26, 2023
An asteroid will come within 2,200 miles of Earth tonight — here’s why you shouldn’t worry
By Jennifer Walter
LEARN SOMETHING NEW EVERY DAY.
Share: