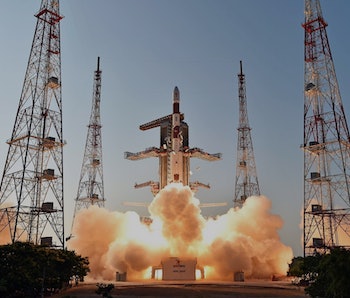 It’s official. Team Indus has secured a launch contract with India’s Space Research Organization (ISRO) to send a rover to the Moon as part of the Google-sponsored Lunar XPrize competition. With this announcement, the race is on, as there are now four teams with verified rides.

The XPrize Foundation verified the contract, which specifies that the Team Indus’s lander and rover are targeting launch in December 2017, atop a Polar Satellite Launch Vehicle (PSLV).

After lifting off from the Bangalore launch facility, the rocket will insert the Team Indus spacecraft into an elliptical transfer orbit. The spacecraft will then be on its own to embark on a 21-day journey to the Moon. It targeted landing site is the Mare Imbrium region, which also happens to be where China’s first lander touched down in 2013.

One of the requirements of the XPrize competition is that all teams must have an official launch contract and that it must be verified by the foundation. Team Indus is now the fourth team to receive the coveted seal of approval from the XPrize Foundation. Any team not securing a verified contract may not be able to continue in the competition after this year.

In 2015, SpaceIL and Moon Express were the first to announce they had verified launch contracts followed by Synergy Moon in August 2016. A fifth team, PT Scientists announced on November 29 that they struck a deal with Spaceflight Industries to transport their Audi lunar rover to the Moon. However, they are still working with the XPrize foundation to obtain verification status.

Through the Google Lunar X Prize competition, the foundation is offering a grand prize of $20 million to the first team who lands on the Moon, travels a minimum distance of 500 meters, and returns photos or videos — all by the end of 2017.

Team Indus is cutting it close to the deadline, as their launch —which is on the books for late December — puts them on the lunar surface around January 26, 2018. The team remains hopeful that the X Prize Foundation might extend the prize deadline by a few weeks to accommodate any potential teams who launched before the deadline but have not yet made it to the lunar surface. In 2015, the foundation extended the deadline to secure a verified launch contract by 12 months, so it could be a possibility.

The mission is estimated to cost around $65 million. Team Indus hopes to raise the necessary funds through sponsorships, by selling shares of the company, and through a crowdfunding campaign they expect to launch in January.

The company could also raise funds by offering to share space on its launch vehicle with other teams who have failed to secure contracts of their own.