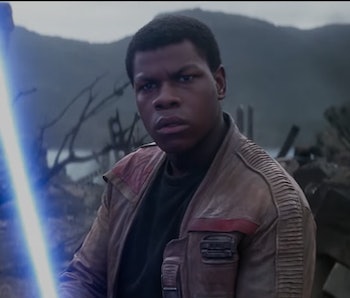 In deciding on names for their newborns, it appears that people are increasingly turning away from traditional monikers and looking for inspiration from the media they consume. The Independent revealed that, in 2016, the revival of the Star Wars franchise and the en masse arrival on television and in theaters of the DC cinematic universe are seeing entertainment-inspired baby names begin to crack the top 100. This is true of both boys’ and girls’ names, as fans are paying homage to their favorite characters.

BabyCentre surveyed 76,993 of its members who gave birth in 2016, collecting data on their baby names. The Independent reports that “Finn jumped five places in BabyCentre’s top 100 boys’ names of 2016, following the huge popularity of Star Wars: The Force Awakens at the very end of last year, while Harrison climbed eight spots.” Meanwhile, for girls, “Luna was one of the highest new entries. Other space-themed names like Nova, Orion and even Jupiter were spotted rising outside the top 100 charts.” Suicide Squad also made an impact, with an increase of baby girls with the names Harley and Quinn.

Thankfully, Harambe did not make the top of the list.

This trend is also in keeping with numbers from previous years, when Game of Thrones-inspired names like Theon and Khaleesi were trendy. Interestingly, those Game of Thrones names also provide examples of the lesson that when taking a name from a television show or movie, one should be careful to get it right.

Incidentally, in the Thrones universe, Khaleesi doesn’t even mean “Queen.” It is merely a title given to the wife of the Khal, which translates to a markedly less empowering name than was probably intended. A little research can go a long way.

More broadly, it shouldn’t come as much of a surprise that these fictional sources are being mined for names by prospective parents. The ever-increasing popularity of complex sci-fi and fantasy franchises has led to wider cultural acceptance of their fandoms. Comic-Con events seem to attract larger and larger crowds each year. It’s cooler than ever to be a geek. As media consumption takes up increasing amounts of people’s physical and emotional time, it only makes sense that they’d start to look for even deeper ways in which to connect to their favored pastimes.

More like this
Culture
8.9.2022 10:00 AM
The Sandman: 11 characters pulled from DC comics history
By Robin Bea
Gaming
8.2.2022 5:27 PM
"Woke" GTA 6 is the best thing that could happen to the franchise
By Willa Rowe
Entertainment
18 hours ago
Will Andor de-canonize Star Wars Rebels? Here's what the showrunner says
By Dais Johnston
Related Tags
Share: