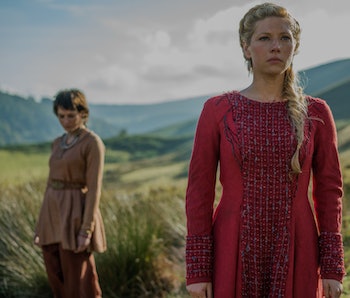 Vikings is a show filled with epic battles, sly Ragnar moments, quiet character beats, and copious ass-kicking. Each week, we break down the epic, the weird, and the unintentionally goofy. Lets dive into Season 4B, Episode 1: “The Outsider.”

This week in Ragnar sass

The first half of Season 1 sidelined Travis Fimmel’s Ragnar too often, either literally removing him from a scene or figuratively crushing his spirit to the point that he was a shell of his former self. The show suffered for it. Not only is Ragnar the heart and soul of the story, but Fimmel plays him with a kinetic energy that energizes each scene. As a result, the beginning of Season 4 was more of a whimper than a bang. But luckily, the writers seem to have learned their lesson.

“The Outsider” sees Ragnar in fine form and back to his old tricks. This is exemplified as Ragnar stands before all of Kattegat and yells, “Who wants to be king?!” Not only are the crazy-eyes are back, but audience and characters alike can’t tell how serious he is. Vikings is at its best when its characters are as spry as its narrative and when Ragnar’s antics shamelessly oscillate between absurd and unpredictable. With this single scene, it’s signifying to the audience that the plodding self-serious tone of Season 4A is gone. It’s an auspicious sign for the rest of the season.

This week in ass-kicking

“The Outsider” is a table-setting episode, featuring more of a prelude to future ass-kicking than the event itself. Nevertheless, Lagertha is clearly cooking up a plan with her new lover Astrid (Josefin Asplund). We’ll have to wait to see how it plays out and settle for now on the glorious image of Lagertha appearing, dramatically holding an owl — it’s another welcome signifier that Vikings has rediscovered its sense of playfulness. She’ll likely get back to ripping men’s balls off in no time.

This week’s most interesting choice

When the older version of Ivar (Alex Hogh Anderson) was first introduced at the end of Season 4A, it was clear that he was a force to be reckoned with. Sure enough, the show pulls no punches, immediately diving into a male impotency plotline. Although plenty of shows feature women agonizing over their inability to have children, male impotency is rare to the point of nonexistence. And even when it’s featured, it doesn’t usually accompany a sympathetic character (see Season 1 of Outlander, when the villainous Black Jack Randall can’t get it up).

Now, Vikings could have taken the easy way out and made us pity Ivar. Indeed, it seemed to be going in that direction in the set-up to the sex scene, when he’s talking with his brothers and bitterly says, “Mind going to bed with our crippled brother? For a joke?” But the sex scene itself is tense and captivating.

Its three stages — Ivar’s fury at his inability to perform, his attempt to murder the girl (“so that you cannot tell my brothers I am not able to satisfy a woman”), and his heartbreaking collapse after she calmly says, “So your prick doesn’t work. Does that make you less of a man?” — exemplify Vikings at its best. It entices the audience to sympathize with characters and actions we’d scorn in our own reality and provides an emotional whirlwind in the course of one brief scene. Ivar is clearly his father’s son in his ability to veer from menacing to vulnerable at the drop of a hat. The Lothbrok boys have invigorated the show in a major way.

Worst person of the week

Ivar is the worst person in “The Outsider” for the simple reason that he tries to murder a slave girl when he can’t have sex with her, which is an objectively shady thing to do. However, in the past, Vikings villains have been one-dimensionally evil (see the mercifully dead Count Odo, or Erlendur). Here, Ivar is unquestionably terrible in one moment; the next, when he breaks down in tears, he’s deeply sympathetic. By the end of the episode, he’s even charming. Not only is this progress for the show, but it almost instantly solidifies Ivar as a fascinating character.

This week in “oh no”

“The Outsider” featured none of Vikings’s usual pitfalls like too much screen time devoted to underdeveloped non-Viking characters. For the first time in several episodes, the season premiere is absent of “oh no” moments from the writers.

More like this
Entertainment
5.3.2022 12:00 PM
How the "Mother of Yoda" conquered Hollywood — and why she disappeared
By Falene Nurse
Entertainment
5.5.2022 6:23 PM
Loki Season 2 departure casts doubt on the MCU show’s future
By Dais Johnston
Entertainment
5.13.2022 10:00 AM
Upload renewed for Season 3. How much longer can Amazon’s best show last?
By Eric Francisco
Related Tags
Share: