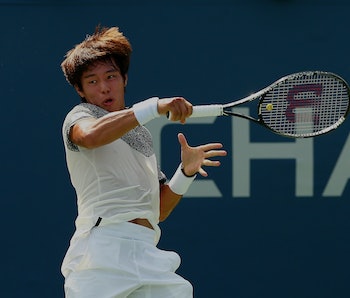 Lee Duck-hee is the 143rd-best tennis player in the world and the second-highest ranked professional in the 18-and-under category. The South Korean 18-year-old also happens to be deaf. His success is a mixture of pure talent, resilience in the face of adversity, and a testament to the scientifically proven fact that deafness can be an asset in tennis.

This may seem counterintuitive at first. World-class athletes are the best because they can quickly and accurately process a number of perceptual, cognitive, and motor skills at the same time. Novice athletes tend to rely heavily on their visual perception skills, while experts rely more on auditory and motor planning. Doing so typically is to the expert’s advantage: Studies have shown that humans react quicker to auditory stimuli than visual ones. Most tennis pros say that they react to the sound of the ball slapping the ground rather than to what they see.

Take Andy Roddick, who complained about the sound of a downpour on the roof of Arthur Ashe Stadium at the 2016 United States Open. “We use our ears when we play; it’s not just the eyes,” Murray told the New York Times. “It helps us pick up the speed of the ball, the spin that’s on the ball, how hard someone’s hitting it.”

Duck-hee, however, cannot hear — something that Roddick told the Times is essential to playing at the highest level. While it’s true that humans typically are better at synchronizing movements to sound rather than visuals, studies have also found that deaf people perform better than hearing individuals when it comes to synchronizing movement with visual stimuli. In a 2015 study in the journal Cognition, a team of University of California, San Diego researchers argued that this may occur because the brain adaptively reorganizes its neurons to fit what is coming in through its sensory systems.

“When deaf (but not hearing) individuals synchronized with the bouncing ball [in the study], their rapping patterns suggest that visual timing may access higher-order beat perception mechanisms for deaf individuals,” the researchers write. “These results indicate that the auditory advantage in rhythmic synchronization is more experience and stimulus dependent than has been previously reported.”

It’s the “radically different experience” that deaf and hearing individuals have with sound and vision that affects how they’ll react to the direction of motion of a stimulus — say, a ball hit from a racket. While there are some documented temporal deficits that affect deaf people, reacting to visual stimuli does not appear to be one of them.

This might be proven to be an advantage for deaf players in a match where sound gets muddled, whether it’s the sound of a downpour or a player who’s grunting loudly that obscures the sound of the ball. This scenario has been put to task previously. As the New York Times tells it:

Tobias Burz, a deaf player who now serves as the technical director for tennis at the International Committee of Sports for the Deaf, recounted an experiment he once conducted with a higher-ranked hearing opponent. After winning their first set, 6-2, his opponent was curious what it was like to be a deaf player, and used earplugs and wore headphones for their next set. Burz won, 6-3.

Duck-hee is the first deaf tennis player to reach this level of professional success. It remains to be seen how high in the rankings he’ll climb, but for now it seems that not being able to hear the ball isn’t going to be stopping him anytime soon.