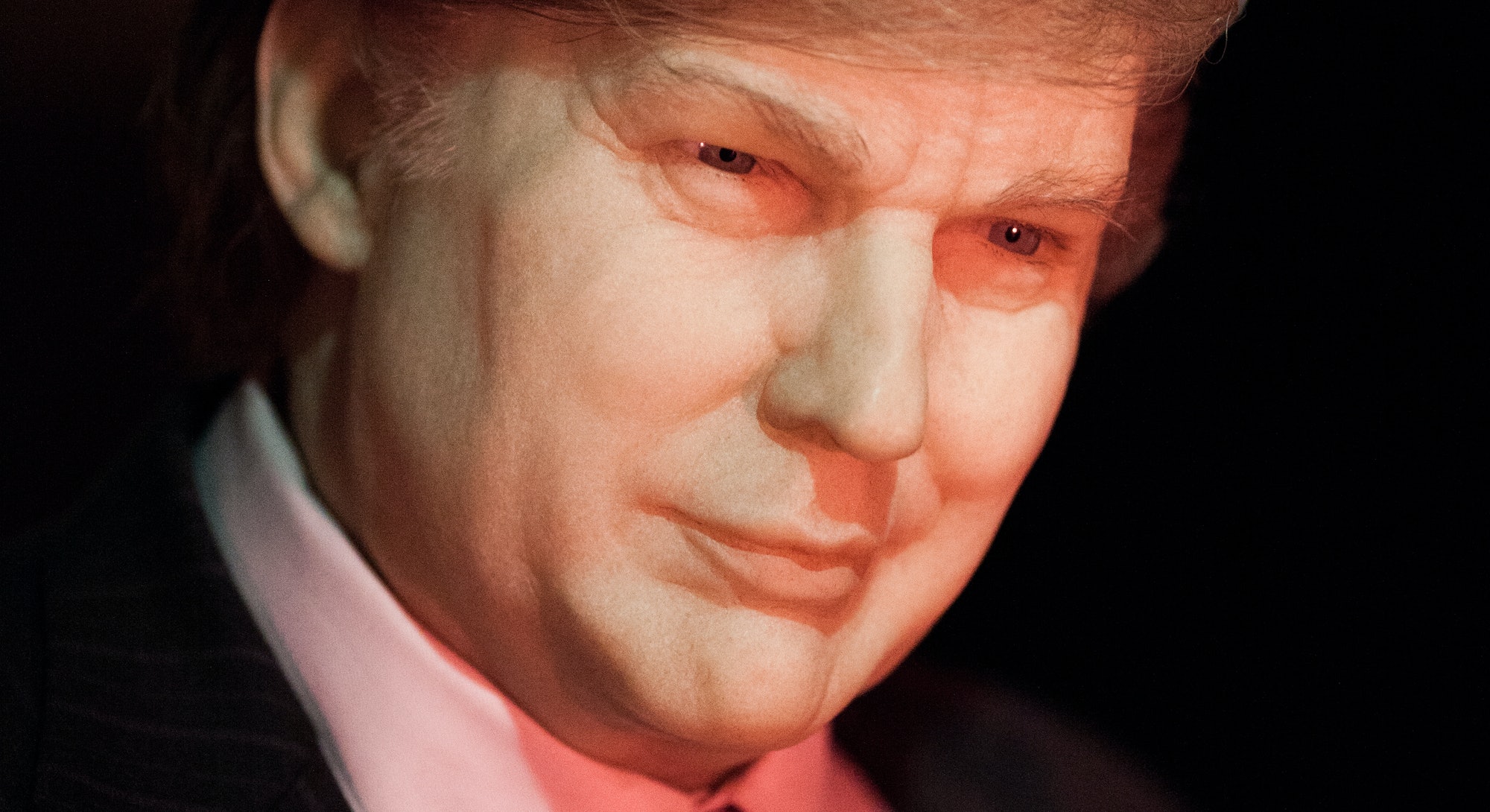 With a consistency that would be admirable if it weren’t so unnerving, President-elect Donald Trump has spent the weeks since his election nominating under partisans to his cabinet and throwing hissy fits on Twitter. He’s also taken time out of that busy schedule to make a historic diplomatic blunder and boldly come out for an unconstitutional plan to make flag burning punishable by loss of citizenship. This behavior has confirmed the fears of the left and TKed the concerns of many on the political right. If Trump continues to take a dilettantish, reality television approach to governance, the thinking goes, his presidency might be a historic disaster. He could even unseat James Buchanan as the unofficial holder of the title: “Worst President.”

Robert Strauss, author of Worst. President. Ever.: James Buchanan, the POTUS Rating Game, and the Legacy of the Least of the Lesser Presidents, may have a singular insight into Trump’s likelihood of exceeding his historical forebears by succeeding at nothing. Strauss says that ranking leaders is an American tradition and that Trump, rankings lover that he is, won’t be spared by talking heads or historians. Inverse asked Strauss what it would take for Trump to be worse than Buchanan, who was absolutely fucking terrible.

So what is this POTUS ranking game that you and other historians tend to use?

It’s the American historian parlor game. It’s what basketball fans do to the college basketball ratings. It’s what music fans do to who are the 15 greatest guitarists. It’s no different, it’s the same thing. I hesitate to call myself a “historian,” but I guess I am now. Over the years, there have been published surveys. In all of them, from 1948, when Arthur Schlesinger, who was a well-known Democratic thinker, did one, until recent ones done by Marist College and the Chicago Tribune and Wall Street Journal. The top three are always Washington, Lincoln, and FDR, always. FDR is always third of those three and Washington and Lincoln are one, two. After you get past that, you still have 40 other people, soon to be 41, and then there’s the ups and downs of who gets better or worse. In the end, James Buchanan is almost always at the bottom. Sometimes somebody beats him out, and there’s sometimes reasons that they give that I wouldn’t substantiate.

What’s often lacking from this game of rankings and ratings of presidents?

What presidents from the past might current ones look to for guidance?

If Mr. Trump and Mrs. Clinton asked me who they should try to emulate, I’d say, “Well, it’s not like you can create the circumstances that made Washington and Lincoln great. I know what people think, but there’s not going to be a Civil War, I’m sorry. It’s not going to happen. If they can’t do that, you can’t be Lincoln in the Civil War. You can’t be Washington; we’re not starting a new country.”

In any case, what are you left with? Are you going to say James Monroe? Pretty good president, but that’s like saying, “I’m going to do a profile of the fourth best Chicago Cub,” you know? Probably worthy, but not what we’re looking for at the top. What you can be is you can not be James Buchanan. You can look at his administration, his presidency, and say, “I’m not going to do that. I’m not going to lead my country into Civil War. I’m not going to do all those things and here’s the reason why.”

Now, I know it’s sort of obscure for people to start thinking about James Buchanan, the president of the 1850s, but our country isn’t that old. Nobody’s still living from then, but how different is it? Now, I don’t know how old you are, but you probably don’t remember LBJ or JFK, the presidents of my teenagehood, right? They’re somewhere there, Marilyn Monroe sings to JFK. In a way, it’s no different than talking about them or even Jimmy Carter. I was just reading Jimmy Carter, there was an op-ed in the New York Times, and he talks about his greatest accomplishment, the Camp David Peace Accords. He says, “38 years ago,” I’m thinking, “38 years ago? Really? Wasn’t that last week?”

Going off that idea of what you can do is not be James Buchanan, have you seen anything from Trump so far that kind of emulates Buchanan?

Okay, now, here’s what you have to be careful of, and that is you can predict, but historians like to have the record, right? It’s really difficult, it’s even difficult to evaluate Obama, seven-and-a-half of his eight years are gone. We can go through a Trump presidency that’ll negate everything that Obama did or practically nothing. We don’t even know how to evaluate Obama yet, because we don’t know if some sort of national healthcare, whatever you want to call it, the ACA, is going to exist or not. If it does in some other form, whatever the Republicans have to do with it, then you have to put it on his record that he did this and it lasted. Then, you find out later on, when you go back as a historian, what seems nothing is actually important.

I’m giving you a time period. Sixty years from now, your great grandchild is going to come to your grandchild and say, “Dad, you’re not going to believe it! Back, in 2016, lots of people thought the president wasn’t even born in the United States!’ because today, you and I know that that’s essentially how Trump got started, right? Sixty years from now, it’s going to just be a blip on the horizon, because I don’t know whatever you say, American history, junior year in high school, it went by so fast, right? Washington started a country, Jefferson, Declaration of Independence, Lincoln, Civil War, Great Depression, World War II, and now it’s May. You don’t have time to inspect these things in detail.

What made Buchanan such an awful president?

My thesis in this is the overall reason that Buchanan and others are “bad” presidents is that they don’t make decisions. Buchanan was the most qualified man ever to be president, as far as the governmental record. He had been in both Houses of the Pennsylvania legislature. He’d been both Houses of Congress. He had been secretary of state, minister to Great Britain, minister to Russia. He had been thought of for the Supreme Court twice and apparently turned it down.

He had sort of run for president three other times, much like somebody would run and not get nominated. By the time he’s 65, he finally gets nominated to be president, but he never produced any significant legislation as a legislator. He was pretty good as an ambassador, because he was the best party giver in all of 19th century America, I would say. He gave the greatest parties, he was that kind of guy, you know? He wanted everybody to feel good. Well, when you get to be president, you can’t do that.

I’ll use a baseball analogy. It’s like we’re in the World Series and the Cubs get a guy on first and the manager has to decide whether he’s going to steal or not. He says, “I don’t know. Should I do this? Should I do that?” And meanwhile, the guy’s picked off, so he has a negative result by not doing anything. That’s pretty much how Buchanan and other non-good presidents come out.

Are there any other red flags for when it comes to being a shitty president?

If you were of the different ideological bend than the president, then he’s a bad president, right? You can’t take that out of the equation, really. I hate to say this, but I’m old enough to remember when Nixon was elected the second time, I was frantic. I was a senior in college and that meant that the draft was going to still exist and the war was going to still exist. I was personally affected, as were a lot of people. There was a lot of other chaos going on in that time period, as you know.

Taking into consideration Buchanan and other bad presidents, how might just thinking about history help people deal with or live with the Trump presidency?

I would say get involved. The bigger thing is get involved and run for school board, run for state legislature. The bigger thing is the Republicans control so many state legislatures, which means they control a portion of congressional seats. If, in 2020, it’s the same way as it is now, Congress will continue to be Republican. If you want to affect change, Bernie Sanders and Elizabeth Warren, this is what they’re saying, get out there and run for something. Don’t stand back. That’s one thing.

All this other stuff about people bitching and moaning about this, the election’s over now. What you have to do is point towards two years from now, four years from now. If you’re in New Jersey or Virginia, make sure the Democratic governor and state legislature get elected next year, because they are in the off years. These are blue states, but you never know. Chris Christie got to be governor of New Jersey. Virginia didn’t almost really go for Trump, but could have. People can protest in the streets and all that, that’s well and good, that’s now, but what they really have to do is … We’re not going to change our form of government, it’s just not going to happen. Within our form of government, you got to get out there.

All in all, how bad can a president really be?

Okay, well I’ll have to go back to my guy. I’ll have to go back to my worst president ever. His complete indecision about everything lead to him being this consequential character who essentially starts the Civil War and he’s the president. You’re right to say that you’re looking at Donald Trump. You got to look at him, he’s the last guy. The Truman thing, “The buck stops here,” the buck stops for Trump, too. At some point, he will make decisions. Right now, they’re just stupid Twitter feeds, but in a few months, if those Twitter feeds turn into laws, that’s a different story.

We will find out whether he is that kind of decisive person or not. I would say that if you’re looking for him not to succeed, hopefully the economy doesn’t go down if he doesn’t succeed, but that aside, you’re going to hope that he waffles. Even if you worry about the Breitbart guy and the national security guy, they are still not going to make the decisions, it’s still going to be Trump. You’re going to have to look at those decisions.

A year out, you’re still not going to know where he ranks in the presidents. What if he’s a surprise to you? What if he’s so mercurial that he starts doing things you like? This whole infrastructure thing, that’s not so bad. What if he says, “I don’t know, I didn’t like the ACA, but I’m just going to improve it a little. I’m going to tweak it, so it’s better?” What if that happens? It could, right?

So you’re not ready to write the sequel to your book?

You can suspect, and I would say you probably wouldn’t be completely wrong, but you really don’t know until they actually make their decision or are faced with some circumstances while they really are president. We elect people thinking that they’ll represent our views in some way and then, suddenly, they don’t. We could be lucky and this could be the Gerald Ford administration.