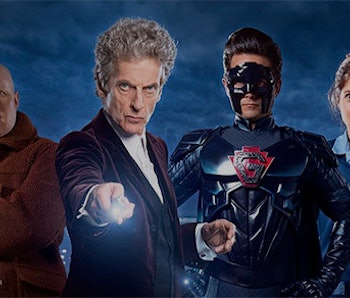 The Doctor, Nardole, and a superhero will have their minds warped for Christmas. The newly revealed synopsis for the 2016 Doctor Who Christmas special has the Doctor and his team taking on “brain-swapping aliens” in Manhattan.

Doctor Who fans haven’t seen a new episode since December 2015, so anticipation is high for any Who-related content. Audiences had previously learned about the Doctor’s exciting soon-to-be run-in with a superhero, and have known about Nardole’s weird involvement for a while. But now, this year’s upcoming Christmas special finally has a synopsis, and it indicates something sufficiently weird:

This Christmas sees the Doctor join forces with a masked superhero for an epic New York adventure. With brain-swapping aliens poised to attack, the Doctor and Nardole link up with an investigative reporter and a mysterious figure known only as The Ghost. Can the Doctor save Manhattan? And what will be revealed when we see behind the mask?

Messing with the mind is a common plot not only in Doctor Who, but across the entire science fiction genre. From 1956’s sci-fi staple, Invasion of the Body Snatchers, to more modern pop culture phenomenas such as the Jedi in Star Wars and the Borg in Star Trek, aliens and telepaths alike have been manipulating the human mind for generations.

The Doctor has taken on plenty of mind-controlling devices and creatures before. The Sontarans have used mind-control implants and the Cybermen have used EarPods to gain information and wipe people of their individuality, just to name a couple instances. Bu since audiences still can’t be sure about what to expect from the term “brain-swapping aliens,” the plot is still up for grabs. Will these supposedly new aliens be literal brains, or will they maybe swap the Doctor’s brain for his new superhero friend’s.

Watch the Doctor Who Christmas Special on December 25 to find out.

More like this
Entertainment
November 21, 2022
Doctor Who's Season 14 companion brings back a trick from the Tennant-Smith era
By Ryan Britt
Culture
November 28, 2022
'Doctor Who’s best episode is a blistering meditation on grief
By Ryan Britt
Entertainment
Dec. 1, 2022
Guardians of the Galaxy Vol. 3 trailer reveals our first look at Adam Warlock
By Hoai-Tran Bui
Related Tags
Share: