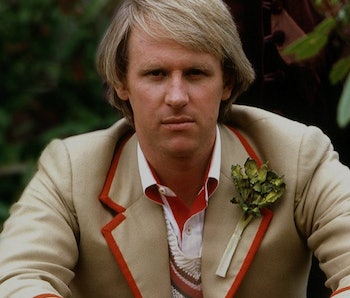 The Doctor and his many faces have been spinning through time and space for centuries, dragging innocent Earth dwellers into his schemes, and saving the universe from destruction. But which of his pre-2005 adventures do you really need to see in order to understand the complicated history of Doctor Who? Here’s a cheat sheet sampler of the old stories to help you get caught-up.

When the new series started up in 2005 with Christopher Eccleston at the helm, it was the reboot to end all reboots. Viewers who were old hats could once again revel in the Doctor’s quirky, heartwarming, tearjerking adventures, and a new generation of fans got a new generation of Doctors to fall in love with. But a lot of new fans tend to forget that the old series even exists. There’s a lot to comb through in the 26 seasons of the old show, and it can get overwhelming, but below, we’ve outlined eight adventures to whet your early Who appetite. The following adventures vary greatly in plot and overall feel, but they’re all purely Doctor Who.

“The Daleks” (also known as “The Mutants” and “The Dead Planet”) was the first serial in Doctor Who to take place entirely on an alien planet. While that might be old hat now for modern viewers, it was a huge deal at the time. What’s especially important about this episode is that it’s the first time we meet the Daleks, the Doctor’s sworn enemies — though we don’t know much about the Doctor’s history at this point. For the time being, the Daleks have just survived a nuclear war with “an enemy.”

The TARDIS materializes on the SS Bernice, a ship that disappeared in the Indian Ocean. Without giving too much of this totally unexpected plot away, the Doctor soon realizes that he and his companion Jo Grant have stumbled upon a machine outlawed long ago by the Time Lords — insanity and crawling through circuitry ensues. The basic premise feels somewhat similar to the Eleventh Doctor’s “The Beast Below” adventure, but with a circus surprise rather than a royal one.

When companion Sarah sees an apparition of a jackal-like face, the TARDIS is forced from its flight path and lands in the Egyptian artifact-filled home of the Scarman family in England. The story involves mummies, robots, and aliens, which is basically all you’ve ever wanted of a Who episode.

“City of Death” was the first episode to shoot on location for an adventure taking place outside of England. The production crew traveled to Paris for two months in 1979 to shoot the episode, which involves an alien named Scaroth. He wants to steal the Mona Lisa so he can finance time-travel experiments and, ultimately, destroy all life on the planet.

This is a hard one; it’s the first time one of the Doctor’s companions dies. As painful as it is, it’s a necessary part of the Doctor’s history. The Cybermen are in possession of a powerful bomb that could — as expected — destroy the planet. Things have never been and never will be simple for the Doctor.

This one’s just a classic. If you’re looking for a taste of five Doctor iterations in one place for a fast game of catch-up, this is the episode for you. Richard Hurndall had to take over as the First Doctor for William Hartnell, due to the latter’s having passed away since last appearing as the Doctor 10 years previous. As part of Doctor Who’s 20th anniversary, four former regenerations of the Doctor and three former companions are forced into the Death Zone on Gallifrey by a mysterious force. Oh, and the Daleks and Cybermen are there too.

“The Caves of Androzani,” Season 21, Fifth to Sixth Doctor Regeneration

“The Caves of Androzani” is when Peter Davison’s Fifth Doctor regenerates into Colin Baker’s Sixth Doctor. Drug-producing bats on a desert planet are to be blamed for the ensuing craziness, and the only antidote is the milk of the queen bat. Of course.

Doctor Who: The Movie, Eighth Doctor

And, finally, we reach the TV movie, the only real glory Paul McGann got during his reign as the Eighth Doctor. He reprised his role in the 2013 mini-episode “The Night of the Doctor,” which shows the Eighth Doctor’s final adventure. But the television movie is something else entirely. A British-American-Canadian concoction, this movie was originally meant as a back-door pilot for an American-produced Doctor Who. Obviously, it fell through, and we had to wait until 2005 for a relaunch of the series.

The best part of this movie is that it acts as a true bridge between the old series and the new. And the Master is there, so how can you not love it?

More like this
Entertainment
Jan. 30, 2023
Doctor Who Could Become the New Marvel — But There's a Catch
By Ryan Britt
Entertainment
Feb. 4, 2023
The Last of Us Episode 4 trailer teases the entrance of Melanie Lynskey’s character
By Claire Fox
Culture
17 hours ago
How One Lost Episode Solidified Sawyer as TV’s Greatest Antihero
By Jake Kleinman
LEARN SOMETHING NEW EVERY DAY.
Related Tags
Share: