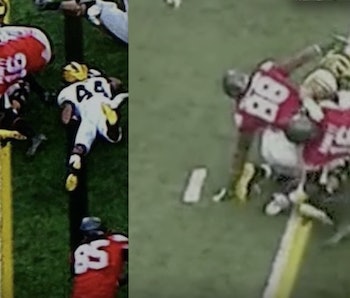 Saturday’s game between Ohio State and the University of Michigan came down to a controversial fourth down conversion in double overtime. Referees ruled that Ohio’s quarterback, J.T. Barrett, made it across the line for a first down, which the Buckeyes later turned into the winning touchdown. But in video replays, Barrett looks pretty damn close to the first down, which has led fans on either side to furiously debate whether the play was legitimate. Buckeye fan Greg Storer, in a feat of applied math, presents a compelling case to prove that Barrett really did make it to the 15-yard line at the first down.

In a YouTube video, Storer presents us with a split screen: on the left is a shot taken at “a perfect” vertical angle — that is, it’s directly over the line — and on the right is a shot of the game in which the yard line is at a diagonal. Because the line in the left photo is perfectly vertical, Storer argues, we can determine whether the ball really crossed the plane. Check it out below:

Storer then makes the case that both photos show the exact same moment, using the position of Barrett’s hand, the limbs of the other players, and, most importantly, the positioning of Michigan’s Delano Hill’s towel (he’s number 44). The question, then, is where is the ball? Storer pulls up video and slows it down. If you watch the vertical line, as well as the moment the towel and the players fall, then the ball should be “well over the 15-yard line” when the video is stopped at 3 minutes and 57 seconds.

“And so, first down, go Bucks,” Storer signs off.

Should fans like Storer even have to be making meticulous videos to prove their team won fairly? In an article on Forbes, commenter Roger Groves questioned why fans should be subjected to the “tyranny of traditional eye-test ball spotting” when “technology could solve the problem.”

It’s a fair point. Studies demonstrate that it is simply beyond the capacity of the human eye for a referee to accurately capture all of the various movements that happen during sports. In a 2011 study of 41 of the best international and nationally ranked soccer referees, only ten were considered to have “successful visual skills.” That doesn’t bode well for the reliability of any football ref.

NFL officials have teased that they are potentially interested in incorporating more tech into the game. In 2015, the league suggested that they were interested in putting sensors into the ball, which would allow them to monitor its actual position on the field. And in 2016, the NFL’s senior vice president of officiating, Dean Blandino, said that the league was still considering using lasers and sensor chips to tell exactly and instantly where the ball lands on the line, which would have been pretty handy for all of this Barrett drama if applied to college football. Blandino, however, was never clear on whether incorporating this tech would ever actually happen.

“There’s certainly new technology we can explore,” Blandino told the NFL Network. “We just have to be careful with these technologies because it’s not as simple as the football being at a certain spot. When was the elbow down? When was the knee down?. . .So you just have to look at the new technologies and [question] does it make it make sense of our game, and that’s something that we’ll continue to explore as we move forward.”

That certainly doesn’t mean that there isn’t a wealth of patents for tech developed by inventors eager to make football calls more accurate. Until then, fans like Storer will continue to do the dirty, analytical work regardless of what the refs actually call.

More like this
Science
Jan. 28, 2023
How does the placebo effect take hold? A doctor explains two influential factors
By Kathryn T. Hall. and The Reader
Science
22 hours ago
Clean energy farms may endanger birds and bats — but the remains can reveal a solution
By Emma Foehringer Merchant and Undark
Science
Jan. 29, 2023
This nuclear-powered X-ray “flashlight” may help scientists probe the Moon for water
By Andy Tomaswick and Universe Today
LEARN SOMETHING NEW EVERY DAY.
Related Tags
Share: