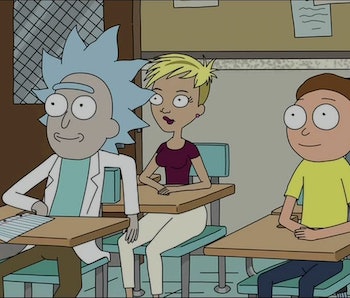 No one knows when Rick and Morty Season 3 is coming back, broh, and we can only speculate about whether it will begin in December or start up in 2017. What we can do is revisit the most disturbing plot twists in previous seasons, or obsess over fan art, or place bets on whether or not multiverse theory will allow Krombopulos Michael to break Rick out of intergalactic prison. It’s a lot to deal with.

While we wait for Justin Roiland and Dan Harmon to announce their return to Adult Swim, we’ve power ranked the 8 best versions of Rick visible so far in Rick and Morty. The surprise? Rick C-137 isn’t the best, or even the second best. Let’s get schwifty.

The Council of Ricks

The Council of Ricks comprises Rick Prime, Quantum Rick, Maximums Rickimus, Zeta Alpha Rick, and Ricktiminus Sancheziminius, all of whom are complete and total dicks. Rick C-137 has to explain why their system is broken, and they still accuse him of Rickicide and almost turn his consciousness inside out. Super unsquanchy, only worth zero out of 10 schmeckles.

These guys squeak past the Council because it’s a pretty funny scene when they chase C-137 Rick and his Morty through a restaurant, wearing red X’s on their heads to differentiate themselves. Not a bad move, but their squanch is still sub-par. Half a schmeckle at most.

The Scientist Formerly Known as Rick

We only see this poor fool for a moment, after he’s been brutally murdered by Robo-Rick (whom we later find out is actually just a robot powered by the One True Morty). He’s got a great pencilstache and probably doesn’t allow any of his experiments to be hosted online. RIP Prince-loving Rick, we hardly knew you enough to squanch you. One schmeckle for grief.

This Rick is super cool, because he’s really just C-137 Rick with his “evil” level dialed up a smidge. Still, he can’t rank very high on the list because he tries to kill our version of Rick and Morty, and he creates a really wasteful matrix of wounded Mortys in order to hide his deeds from the world. Squanchtastic lip scar, though, so that’s one-and-a-quarter schmeckles.

Ah, Grandpa Rick, the one we’ve come to love over two seasons of misadventures. He may not be the ultimate Rick in the multiverse, but he’s ours, you know? Extremely squanchable, a whole handful of schmeckles.

Look, the dumbest Rick in the multiverse may not be able to out-invent anyone, but he’s certainly good at making no-bake brownies! He’s also been on the only character on the show to bring Jerry out of his shell and boost his confidence, unless you count Sleepy Gary. His affectionate relationship with C-137 Jerry made for a genuinely heartwarming moment, especially when they re-united for a whole day of fun. Let’s shower these two squanch-brohs in schmeckles, shall we?

Morty and Summer Smith agree with the show’s audience: Tiny Rick is still — though he’s been chopped to bits — the ultimate Rick in the multiverse. He’s an acoustic guitar player, a talented dancer, he’s down to hunt vampires, and he supports his grandchildren in a way C-137 Rick probably can’t even comprehend. He also appreciates Elliott Smith!