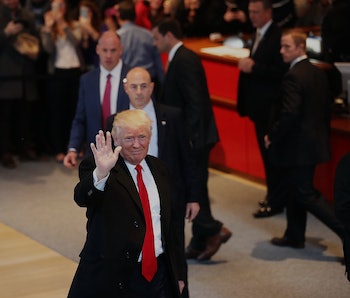 The 2016 election saw a huge array of new terminology and political theory thrown around, all in effort to understand the rise of Donald Trump. Once thought to be impossible, a Trump presidency is now a very real thing. It has left many liberals asking how this happened. From the litany of explanations, one has stood out as having a particularly curious implication: Gaslighting. It’s a term which most people have, fortunately, never come into contact.

In point of fact, the internet has declared, the entire country was gaslighted by Trump. So, what exactly is it? The Oxford English Dictionary says that gaslighting is psychological manipulation with the aim of getting the victim to doubt their memory or sanity. It’s named for a play written in 1938 by the British dramatist Patrick Hamilton.

Normally, the term gaslighting is reserved for use in identifying the type and severity of abuse occurring inside a relationship between two people — spouses, for instance. The abuser gaslights the victim in order to achieve more power over them, tricking them into thinking that the abuse never actually happened. Because of the huge degree of personal distress and mental degradation that can result from gaslighting, it is not something to be taken lightly.

The internet, however, has other ideas.

The past year has seen a steady increase in search for the term, indicating increasing public interest in its true meaning. But that meaning, it appears, is not meant to be taken in the context for which it was created. Rather, it is being used to classify Trump’s actions on the campaign trail, namely those instances where he would deny saying something even though it was abundantly clear that he’d actually said it.

Paul Rosenberg, writing for Salon, breaks down exactly how gaslighting a la Trump took place. Basically, he asserts that it was Trump’s plan to continually deny obvious facts and create an “alternate reality” in order to shift focus from his myriad scandals. If this was the case, Trump’s plan looks to have succeeded. It therefore makes sense that the term would be gaining popularity, since people on the left seem increasingly to feel like reality itself has taken a dramatic and unexpected turn.

Yet it might be a tad extreme to say that Trump has people questioning their own sanity now. There are some crucial differences between Rosenberg’s version, the internet’s definition, and the actual act. By the same token, words’ meanings can transform, especially when the entire internet doesn’t know exactly how to use the word to begin with.

Gaslighting, in its purest form, is intended to make the victim think that they are not sane. They are made to believe that the version of events that they recall is not accurate, and that they cannot trust their own instincts or evaluation. That’s pretty extreme, even for a metaphor. And it’s hard to argue that Trump’s intentions were actually to convince people he’d never said those things. His deflections can more accurately be chalked up to a desire to do just that: deflect, distract, and refocus. It’s nearly impossible to argue with a person who just says, “No, no, no,” no matter what, and that’s what Trump was doing. The cost-benefit of pushing the issue with him became so low that moderators and newscasters just moved on. People didn’t forget. They just gave up.

Even given all of that, there are those who might argue that there’s still room for comparison here. Trump was the head of what could be called a massive disinformation campaign that ultimately left people divided about what was true. His version of America was very different from the one Hillary Clinton was promoting. His vision for it was different, too. One could say that that is, in effect, a very minor, public form of gaslighting. But anyone inclined to call it that should consider carefully the implications of appropriating such a sensitive term. Victims of personal gaslighting may wind up damaged and permanently changed. As much as people feel disillusioned about the election, are these the kinds of connotations we want for our experiences?

More like this
Science
Feb. 4, 2023
Why ChatGPT Could Usher in a New Era of Scientific Discovery
By Brian Lucey, Michael Dowling and The Conversation
Gaming
Jan. 25, 2023
"Mindboggling" Launcher layoffs prompt outcry and tributes to WaPo gaming vertical
By Jess Reyes
Culture
17 hours ago
Genius things you didn't know you were missing in your home — & they're all super cheap
By Veronika Kero
LEARN SOMETHING NEW EVERY DAY.
Related Tags
Share: