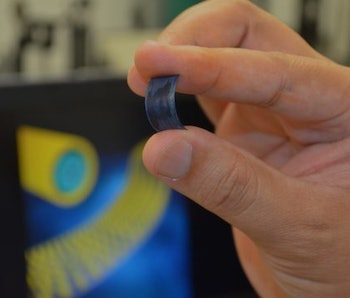 If you’ll forgive the personification, batteries get a little tired after a while. After they’ve been recharged a few thousand times — which happens in as little as 18 months, given how much we use our devices — they hold less power with each charge. A new supercapacitor battery prototype being developed by a team of scientists at the University of Central Florida doesn’t have that problem: It can be recharged 30,000 times without issue.

The supercapacitor battery works by using two-dimensional objects. UCF developed a chemical synthesis process that makes the few-atoms-thick material incredibly stable — the prototype is said to have more energy density, power density, and cyclic stability than the lithium-ion batteries used today. It’s also flexible, which means it could be used in everything from electric vehicles to smartphones or wearable devices.

UCF said many lithium-ion batteries can only be recharged about 1,500 times before they start to degrade. That would be enough to last about four years if a device were only charged once a day. Yet many people have to plug in their phones, tablets, and other gadgets multiple times per day, whether it’s because of lackluster battery life or because they only partially refill the battery instead of charging it all the way back up.

Besides holding more charges, the prototype is also said to recharge faster than today’s batteries. “If they were to replace the batteries with these supercapacitors,” UCF postdoctoral associate Nitin Choudhary said, “You could charge your mobile phone in a few seconds and you wouldn’t need to charge it again for over a week.” Current devices take longer to charge and have shorter battery lives.

This supercapacitor battery prototype was initially published in ACS Nano in October. In the time since, another UCF team showed off a system that uses a solar cell to collect power and a supercapacitor to store it. The result: Wearable solar panels that can recharge smartphones or wearable devices.

A team at the University of Cambridge, meanwhile, revealed a lithium-sulphur battery that draws inspiration from the human intestine to beat its lithium-ion cousin. The battery lasts five times longer than its predecessor, which means it has to be recharged less often and will thus be more durable than the batteries used in many of today’s products.

All of these developments follow increased concern over lithium-ion batteries. Much of that worry stems from the simple desire to make devices last longer, both on a single charge and over time. But it’s also partly motivated by the increasing safety concerns about today’s batteries motivated by the exploding Samsung Galaxy Note 7 and a Tesla Model S that burst into a giant fireball after it crashed into a tree.

Samsung doesn’t know what made the Galaxy Note 7 explode. It recalled the product after many reports of exploding devices, but it was unable to recreate whatever issue caused those explosions in its lab, which means the world might never have a definite answer to why a mass-market phone was so volatile.

Tesla’s problems are less mysterious. A crash that occurred in early November damaged the electric vehicle’s battery. It then exploded, and Indianapolis Fire Department Battalion Chief Kevin Jones said the battery’s cells were “firing off almost like projectiles” as first responders tried to contain the fire.

A more durable battery could help alleviate those problems. UCF said it’s working to patent its technologies but that the supercapacitor battery prototype is not ready for a commercial debut. Inverse contacted the college and a member of the team to learn more and will update this post if we hear back.