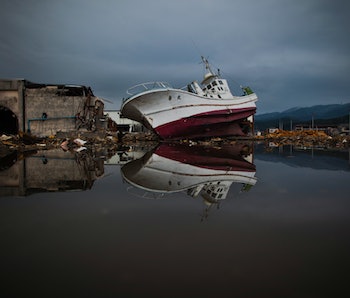 A week after New Zealand was hit by a massive earthquake, a magnitude 7.3 quake struck Monday off the coast of Japan, sparking a tsunami warning along the coast of Fukushima — the site of a disastrous tsunami and nuclear meltdown in March 2011. This quake is drastically smaller, though it could still cause some serious damage.

The Japan Meteorological Agency reports that the earthquake occurred on Monday at roughly 6 a.m. local time (4 p.m. Eastern). It was strong enough to shake buildings in Tokyo, 150 miles southwest of the epicenter, and the U.S. Geological Survey measured the quake as a magnitude 6.9. Japanese earthquake measurements tend to vary from other agencies, so this isn’t unusual.

A 3-meter tsunami is expected to hit the coast of the Fukushima Prefecture, and residents are being urged to evacuate immediately. Smaller waves have already hit the shore. Japanese officials also issued Tsunami advisories for a lot of the country’s Pacific coast, including Miyagi and Iba prefectures.

There have been no reported abnormalities or problems at the nuclear power plant, reports Japanese public broadcaster NHK.

Although scary — and full reports of the damage haven’t come in yet — the earthquake pales in comparison to the 2011 quake, which was the largest ever to hit Japan. The magnitude 9.0 earthquake and resulting tsunami killed almost 19,000 people as well as causing a nuclear disaster.

The Euro-Mediterranean Seismological Centre, an independent earthquake monitoring institution, said this quake was “not comparable” to the 2011 one, and was in fact “1,000 times smaller.”

“When magnitude increases by one, energy is multiplied by 32,” EMSC explains. “There are about a dozen M7s a year, one M8 a year, but M9s like in 2011 are exceptional. An M7 can generate a ‘local’ tsunami but not one which crosses an ocean like in 2011.”

The comparatively short amount of time between this earthquake and the earlier quake that hit New Zealand are not related, at least so far as there isn’t some grand interconnected earthquake apocalypse coming.