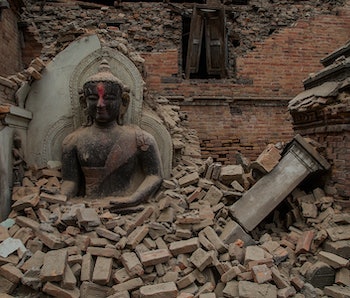 This week, a magnitude-6.2 earthquake struck southern Japan, killing two and leveling 19 homes just after a 6.9-magnitude quake hit Myanmar, where it was felt for hundreds of miles but did little damage. Naturally, the Asian media attempted to connect these two events, insinuating or outright stating that these quakes represented the first wave, and that apocalyptic escalation must be inevitable. Fortunately, you can’t believe everything you read in Indian newspapers.

“When headlines like these become a bit too common, you know that they point to something bigger,” an extremely lazy journalist wrote in Firstpost, citing several other recent quakes and tremors felt on the subcontinent. Meanwhile, The Express back in England went with the following headline: “Scientists fear ‘the Big One’ is COMING as FOUR major earthquakes strike in 48 hours.”

That’s a good headline, but it’s not how tectonics work. Here’s why:

There have been 36 earthquakes of magnitude 6.0 or larger around the globe in 2016, and that’s completely normal. Most of these have occurred in the Pacific “Ring of Fire” region, because that’s the region of the world that is most prone to earthquakes.

Humans measure the significance by their impacts to humans, not by their magnitude. So they make news when they occur in heavily populated areas, areas that are not used to earthquakes, or areas where poor infrastructure allows for significant damage. Headlines are not a good measure of global earthquake activity.

2) Earthquakes don’t cause other, distant earthquakes

An earthquake in one part of the world will not set off another thousands of miles away. Earthquakes are often followed by aftershocks, as the Earth’s crust readjusts to its new position, but effects are local and die out usually over several days. But for the most part, each fault does its own thing, independently of those around it. The planet certainly does not start to rumble softly and then build up to a “megaquake,” as these articles suggest.

Seismologists have no way of accurately predicting when an earthquake will occur. What they can measure is earthquake hazard. They can observe a particular fault and calculate the energy bound up in the fault as the plates crush together. Then they can say, that if all of that energy were to suddenly become unbound all at once, an earthquake of a given magnitude would result.

That’s what seismologist Roger Bilham, the expert quoted in these articles, was talking about when he said: “The current conditions might trigger at least four earthquakes greater than 8.0 in magnitude. And if they delay, the strain accumulated during the centuries provokes more catastrophic mega earthquakes.”

That’s the potential energy stored in the faults of the Himalayan region, and it says nothing about when or how that energy will released. Bilham never correlated recent earthquakes in Asia with this hazard, in fact, the quote was pulled from a Times of India article written back in January.

If anything, moderate earthquakes on a given fault reduce the eventual risk of the Big One. As tectonic plates push together, they slowly build up energy. With a moderate quake, some of that energy is released. But not enough to dampen the stored energy in a significant way. It takes 1,000 magnitude-6 earthquakes to release the energy stored in a single magnitude-8 (the Richter scale, remember, is logarithmic.)