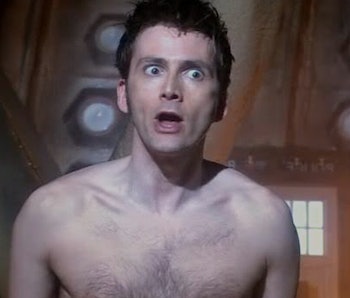 Though he arrived with an enthusiastic “Ohhhh yes!” the duplicate version of the Tenth Doctor created by the Time Lord meta-crisis will probably not return to the regular universe from which he sprang.

In the 4th season Doctor Who episode, “Journey’s End,” Donna Noble (Catherine Tate) accidentally created a duplicate of the Doctor (David Tennant) while battling the insidious Dalek plot to use a “reality bomb” to destroy every conceivable reality, and parallel dimension, ever. Possessing only one heart as opposed to the usual two for a Time Lord — this version of the Doctor was left with Rose Tyler in the parallel dimension conventionally known as “Pete’s World.”

The narrative cheat here was simple: David Tennant could easily return at anytime as an aged version of the Tenth Doctor, since this duplicate would live a normal “human” life. But, according to the current powers that be, it’s probably not going to happen.

“No,” said current Who showrunner Steven Moffat, in a recent interview with Doctor Who Magazine. When asked about the chances of Tennant returning to the role via this plot loophole, he explained his reticence: “Because if we were going to bring David Tennant back to Doctor Who — and I’m not saying we are going to — then we would bring back David playing the real Doctor, and not a substitute Doctor.”

Back in 2013, prior to the debut of the multi-Doctor anniversary episode “The Day of the Doctor,” some fans believed the return of both David Tennant and Billie Piper signaled the return of Rose Tyler and the clone Doctor from “Journey’s End.” Of course, this was revealed not to be the case, as the Tenth Doctor in “The Day of the Doctor” was definitely the “regular” version, because duh, he wore the brown suit, not the blue one.

Still, it seems like former Who showrunner Russell T. Davies intentionally created this duplicate in order to bring back David Tennant whenever possible, without relying on the time travel or memory erasure plot-tricks employed by “The Day of the Doctor.”

So, while Steven Moffat says that the duplicate Doctor won’t return, fans could read that as a solid “no” but only so long as Moffat remains the showrunner. With new showrunner Chris Chibnall taking over Doctor Who in 2018, rumors have been flying that the 11th season will feature a new Doctor and a new companion. This also leaves the TARDIS wide-open for cameos from cloned Doctors from alternate dimensions.

The next in-canon Doctor Who adventure “The Return of Doctor Mysterio,” will debut on BBC and BBC America on December 25, 2016.