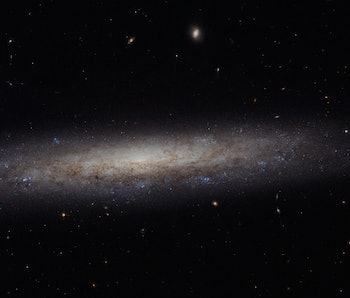 A team of researchers has identified a record-breaking faint dwarf galaxy neighboring our very own Milky Way. Named Virgo 1 for the constellation Virgo, in whose direction it lies, it resides in a class of hard-to-find dwarf satellite galaxies virtually undetectable prior to the introduction of new, larger-diameter telescopes.

The new results, published Monday in the Astrophysical Journal, show that Virgo 1 exhibits an optical waveband magnitude of -0.8, making it the faintest satellite galaxy ever detected, and could play an important role in helping astrophysicists find and characterize dark matter. The new discovery also stokes hopes that there are other faint and ultra-faint satellite galaxies residing close by to the Milky Way that would further aid our understanding of the structure of our neck of the cosmic woods.

The term ‘satellite galaxy’ maybe a bit confusing, but what scientists are referring to is simply a smaller aggregation of gas and energy that’s orbiting the Milky Way on the outskirts. We’ve already identified about 50 faint dwarf galaxies in the Milky Way’s halo, most of which are quite faint. But the Hilo, Hawaii-based Subaru Telescope — which has a diameter of nearly 27 feet, as opposed to the earlier telescopes with diameters between approximately eight to 13 feet — is rapidly stringing together new discoveries of so-called ‘ultra-faint galaxies’.

“This discovery implies hundreds of faint dwarf satellites waiting to be discovered in the halo of the Milky Way, project leader Masashi Chiba, of Japan’s Tohoku University, told the Subaru Telescope Facility. How many satellites are indeed there and what properties they have, will give us an important clue of understanding how the Milky Way formed and how dark matter contributed to it.”

Dark matter is a slippery field of study, but the edges of galaxies — like in the Milky Way halo, where Virgo 1 site — are where we tend to look to observe it and hopefully better understand. The more faint satellites in these locations we can identify, the more we can infer about the process by which dark matter itself assembles in the same regions, and ultimately how dark matter contributed to the formation of the Milky Way itself.

Virgo 1 itself has a radius of 124 light-years, meaning it’s simply too big to anything else with a comparable luminosity, like a globular cluster. The previous record-holder for faintest satellite galaxy was called Segue 1, which weighed in at a -1.5 magnitude on the optical waveband to Virgo 1’s -0.8. A third find called Cetus II actually has a mag of 0.0, but hasn’t been officially confirmed as a galaxy — it’s too compact, and at 280,000 light-years away is too distant to be able to say for sure.

The project behind the discovery is called the Hyper Suprime-Cam Subaru Strategic Survey, and has been active since March 2014. It has a few different goals, but much of its job is surveying extremely large cross-sections of sky for entities that could tell us more about galaxy formation, galactic structure, and the assemblage of dark matter — including dwarf satellites like Virgo 1. The project will be active until at least 2019, so hopefully this is far from the last faint galaxy we stumble upon.